yoblazer mentioned this in the stats topic several times, and it's worth repeating. This may be the biggest contrast in a match picture we ever see. On one side, you have Big Daddy in perfect freak-you-out mode. The guy just feels like something you'd never want to see on the other side of a door at night.

And on the other side is Ness, one of the happiest world-saving heroes ever. Most silent protagonists are brooding loners or swordsman or something. Not Ness. Everyone in EarthBound speaks of him as a kid who always wears a smile and helps everyone out.

Put them together and you get one of the weirdest close matches ever. Ness was the guru favorite, but few people had YEAH NESS WILL WIN THIS FOURPACK NO PROBLEM confidence in the guy, especially given how Daddy's vote-in went and how the first round played out. An SFF beating over Geno means nothing.

Sure enough, Ness did very little early on in the match, even with bracket votes and the Nintendo Power Hour. His lead peaked at 100 15 minutes in, then Daddy decided enough was enough and drilled the brat right in the face. No messing around. Just one punch, right in the face. Took awhile for him to put Ness away for good after that, but in an hour or so Ness gave up the ghost. The final numbers aren't really indicative of how close this was early, but that happens a lot in these.

Before this contest, we'd never seen a 14 seed win twice. With Big Daddy and Jecht both winning in round 2, we had two 14 seeds win twice. 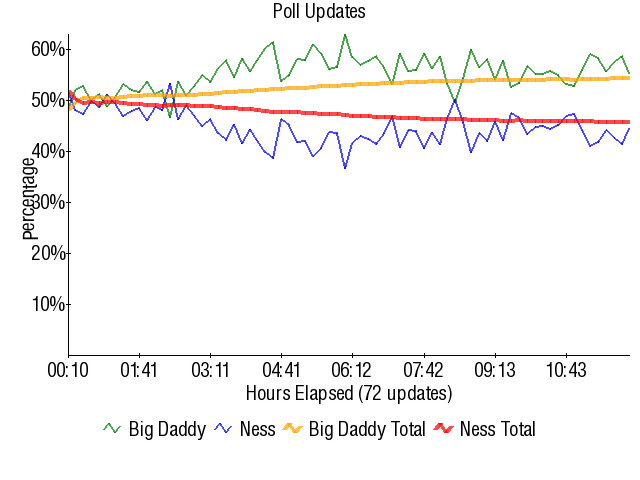