When Jecht upset Phoenix Wright in the first round, everyone knew he'd get bye in round 2 before losing to Zelda. What people didn't see coming was just how well Ratchet would do here. The consensus was a 60-40 win for Jecht, but when the poll started Jecht was stuck middling around the 55-45 range.

And worse yet for Jecht, it stabilized like this for awhile. At night. Square characters don't do badly at night, lest of all against fodder trash like Ratchet who only got a win because he was against Eddie Riggs. You know, even bigger fodder trash. Jecht went on a rampage overnight, but then the morning vote hit and he lost all the percentage he accumulated. So at the end, he was more or less back where he started.

It was bad for Jecht to be sure, but it was one of the weirdest performances ever from a losing character. We can't really blame Jecht's potential weakness, either, because he went on to pull a similar snafu against Zelda. The blame here, if you can call it that, goes on Ratchet finally pulling his head out of his ass and getting it together a little. He gets a new game every year, and funny commercials every year, but for some reason this was the year it did something for him. 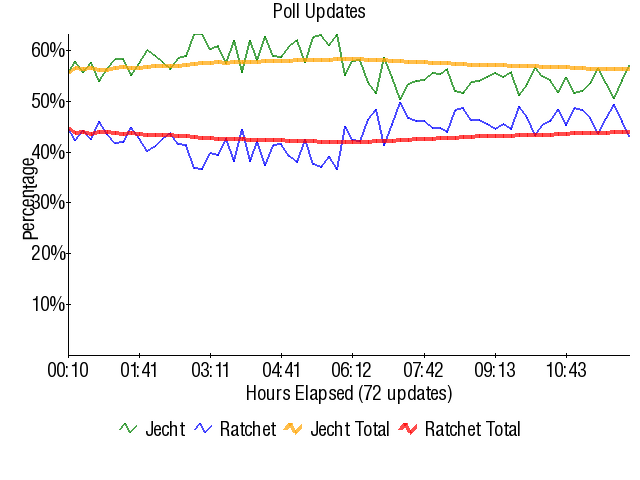