Chaos's first round ended with an extremely weird match. This was the performance many were expecting from Nathan Drake -- mass appeal casual next-gen character winning a day match over a little-known MGS character. It should have been easy for Nathan, but somehow wasn't.

With this match, we were dealing with two much stronger characters in the same boat. Altair was the 2 seed with massive casual appeal, and he got one of the best pictures ever to boot. Liquid was the odds-on stats favorite to win, especially given how berserk he was in 2008, but something just felt funny about this match. Liquid was the favorite, but there was a growing sentiment Altair was going to pull something off. Then the match pic came out, and people started giving up all hope for Liquid. Granted Liquid looks like crap in EVERY match pic, but we're in a new contest age. Everyone has seen all this stuff before, so now everything matters. Picture matters, bandwagons matter, rallies matter, anti-votes matter. And given how much of the Assassin's Creed strength comes from casual appeal and match pictures, Altair had a massive advantage going in.

And even still, could anyone have guessed this would be a 60-40 blowout? Liquid, SFF help or not, beat Luigi twice. One contest later, he goes out and just doesn't even show up against Altair, and all this came less than a week after Boss's upset of Nathan Drake. Altair just totally hammered this poll, which makes the Nathan match all the more confusing. Every single factor people came up with to discredit The Boss against Nathan came to fruition here, and against a character who has proven strong in the past. It makes absolutely no sense.

You can come up with any factor for Altair you want here, but most of them are discredited by Altair and Ezio proving to be garbage later on this contest. Liquid just decided not to show up for whatever reason today, in spectacular fashion. 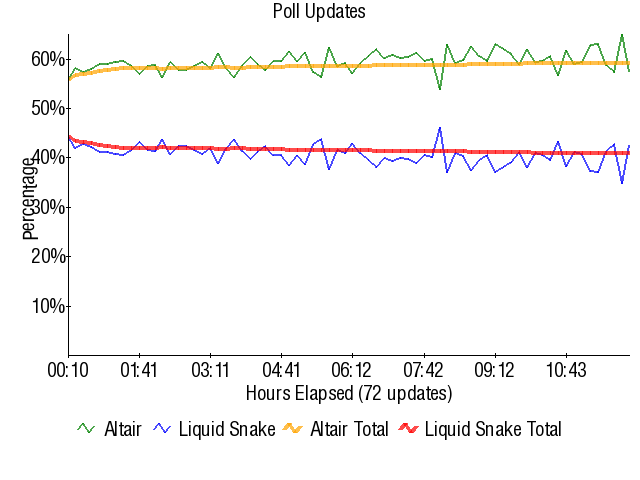 • Previous Match       • Next Match
Retrieved from "https://board8.fandom.com/wiki/(2)Altair_vs_(15)Liquid_Snake_2010?oldid=59153"
Community content is available under CC-BY-SA unless otherwise noted.