Seven pics, and CJayC sure did his absolute best to try and keep us from seeing X.

Given Crono and Mega Man's performances in this contest, it looked like Mega Man had a very good chance at winning this match. Crono looked less than stellar against Master Chief and Vincent, and though Mega Man didn't look like a powerhouse in his own right it would only take a small drop in Crono's strength for Mega Man to be able to win this.

Early on in the match, Mega Man fought like hell to do so. However Crono would soon turn out to be the stronger character and build up a lead relatively easily, and though Mega Man would make minor pushes throughout the match they were little more than 50-50 spurts that were no real threat to the inevitable: Mario/Crono IV.

Unfortunately, Mario/Crono IV was given far too much hype through Crono's beating of Mega Man. Mario was clearly stronger this contest, while Crono and Mega Man were not. Earlier I said that the winner of this match had to flat-out kill the loser to stand any chance against Mario, and winning by less than 3000 votes does not accomplish this. One could easily argue that Mario won the contest back when he beat the hell out of Samus, but the only thing left to do from here on in was to actually hold the final and see what happened. Crono still had a relative chance to win, but it was not a good one.

One final note. For all the Xst bashing that has been done in this contest, I do have to give them a tiny bit of credit. In two very tough matches -- Sonic/Mega Man and Crono/Mega Man, respectively -- going with the stats gave you a win. Can't say much more than that, really. 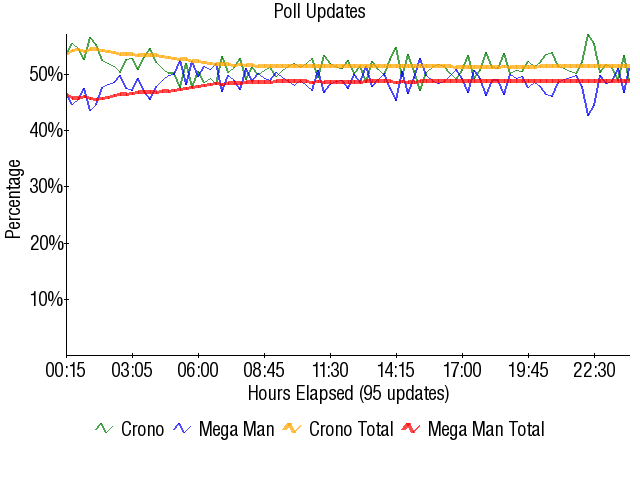 Retrieved from "https://board8.fandom.com/wiki/(2)Crono_vs_(1)Mega_Man_2005?oldid=71350"
Community content is available under CC-BY-SA unless otherwise noted.