Of the four matches that took place in this round, this match was the only one that wasn't interesting in build-up. But once the match got going, a couple of things went on that at least raised a couple of eyebrows.

In the 2004 stats, Squall is projected to get something like 40% on Crono. Yet in this match, despite Vincent being for all intents and purposes even with Squall, Vincent went over Squall's projection by 5%. Not that Crono did so badly early on, because as the match began he had well over 65% of the vote. Unfortunately, once the bracket/board voting died down Crono's percentage began to spiral downward. Crono going down in percentage is typical of pretty much every match involving Chrono Trigger, but the catch in this match was that Vincent put Crono down to having just over 55% of the vote within three and a half hours. From that point on, Vincent found himself involved in another freakishly consistent match that saw he and Crono stuck on virtually the same percentage for the latter 20 hours of the match.

While Crono winning seemed like a lock, it's tough to deny that Vincent overperformed here. Either he scored a lot of rSFF due to the whole New Square:Old Square theory, or Advent Children made a huge difference for Vincent between his match with Squall and his match with Crono. It's not like Vincent overperformed on just anyone, either; this was sprite Crono, and for whatever reason CT characters all go SSJ when given sprites in match pictures.

So either rSFF due to New-Old or Advent Children taking its course. I think that's fairly reasonable, especially given how well Cloud and Sephy would do later on. The issue that this caused however was a large debate on how to adjust the Devil Division in the final stats (or at all), because as we all know the stats have to look as perfect as possible. 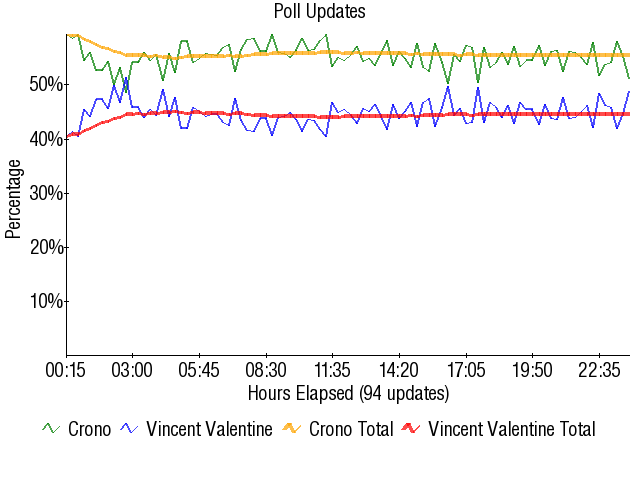 Retrieved from "https://board8.fandom.com/wiki/(2)Crono_vs_(5)Vincent_Valentine_2005?oldid=56140"
Community content is available under CC-BY-SA unless otherwise noted.