Oh, Gordon. The last match in the first round tends to have weird things happen. In 2002, we had that ungodly terrible Crash/Ulala match. In the villains contest, who could forget Master Hand beating Kuja? Then a few months later in the main contest, Pac-Man beat Revolver Ocelot. Not to be outdone, Master Flop was the 2 seed in the last match of 2006's first round. He was paired against Sub-Zero, and we all know how that turned out. In the 2008 character battle (the second fourway), we saw Jill Valentine beat Revolver Ocelot one year after Ocelot beat her, AFTER Metal Gear Solid 4 was released. Fallout 3 > Halo 3 happened in the 2009 games contest, but Halo flopping was massively expected by that point.

But every single one of those matches would have stood in awe had Gordon Freeman managed to blow this match against Peach. And for 30 minutes when the poll was glitched out, he was in serious jeopardy of becoming one of the biggest jokes ever. Even his loss to Tina Armstrong in 2002 would have taken a back seat to this. Had Gordon Freeman -- a 2 seed with newfound Half-Life 2 strength who had just come off of winning Gamespot's own character contest -- lost to Peach, the world might have seriously ended. And for 30 minutes, Peach took advantage of a poll glitch and fought tooth and nail with him.

Thankfully, the poll glitch was resolved and Gordon went on to win. The world was saved by him yet again, although one wonders how good a 53-47 win over Peach really is. Any hype for a Gordon > Tifa upset or Steam rallying was dead and buried after this debacle. 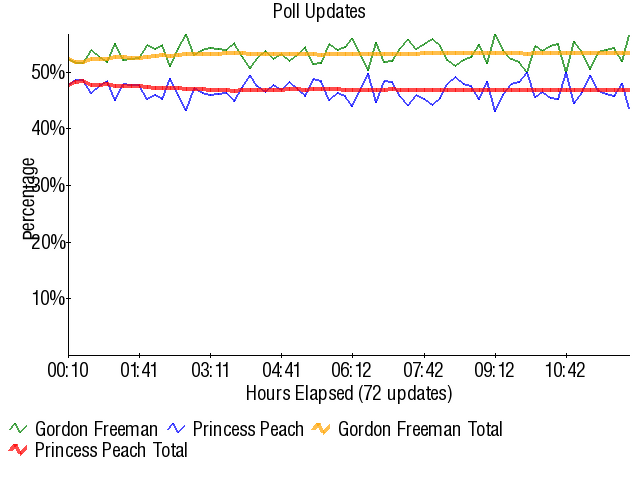 • Previous Match       • Next Match
Retrieved from "https://board8.fandom.com/wiki/(2)Gordon_Freeman_vs_(15)Princess_Peach_2010?oldid=59201"
Community content is available under CC-BY-SA unless otherwise noted.