This match was supposed to be easy.

This match was supposed to be an obvious given.

Games are not supposed to = characters.

Yet seemingly from day one, there were two people, HaRRicH and MasterMage119, who actually had vocal faith in Master Hand. Everyone said that they were insane. Everyone reminded them of Ness, the fact that Master Hand could not possibly be stronger than Ness, and of how powerful Vivi was. No way could one of the most well-developed villains of all time possibly be so weak as to lose to a glove, even if he was from the underappreciated Final Fantasy 9. One could even argue that Kuja would obviously be weaker than Kefka; after all, they're both clown lookalikes, yet Kefka is from the more popular game. It's more than possible that Kuja would be weak, but not weak enough to lose to a glove, not weak enough to lose to a character whose sole purpose is to being a faceless boss fight at the end of the two Smash Brothers games. And who in the hell plays Smash Brothers for the single player anymore?

This poll came out (http://www.gamefaqs.com/poll/index.html?poll=1988) and no one bothered paying attention to it. We said that the voting pool was too small, that Master Hand only had 12000 votes, that the poll didn't matter.

You feel that sharp pain right on your Achilles? That's what a snake bite feels like.

When the poll started, Master Hand did a little better than most expected of him early, but not by much. Many people expected Master Hand to get killed, but he fought to stay above 45% early on. Still, it mattered little en route to Kuja building a lead of 440 votes through the first three and a half hours of the poll. Master Hand made these minor stalls at Kuja as he increased his lead, almost to remind Kuja that he was still there, but Kuja managed to do just fine despite his percentage dropping under 53%.

But then, to everyone's shock, Master Hand caught the morning vote. It wasn't a tidal wave, but it was enough for Master Hand to begin slowly coming back in the poll. As the morning hours wore on, Master Hand took off a few votes here, a few votes there, and though Kuja made every effort in the world to regain control of the poll with minor pushes that looked like he would shake off Master Hand like a bad case of the fleas, Master Hand refused to go away. This pattern continued for a little while longer, but Kuja was unable to stave off Master Hand's inevitable push toward tying the match at the turn of its seventh hour.

But even at this point, no one actually expected Kuja to lose. This was just SSBM carryover, a steroid-induced right hand that was simply benefiting from the morning vote more than anyone expected him to. So long as Kuja was able to continue what he was doing and keep the match within a few hundred, the Square evening/night vote would save him later on. It happened for a multitude of other Square characters, so why not Kuja?

But despite all of this, Master Hand and Kuja engaged in what went down as arguably the best string of events in the entire contest. After tying the match, Master Hand's momentum died down a little. Kuja wasn't about to let a glove run away with the poll, and he quickly recovered. But like every other attempt Kuja made to run away with this match, Master Hand spanked the monkey away and continued his match forward. Master Hand then slowly built a lead of over 100 votes, and at this point, Kuja threw everything he had into the poll. Unfortunately, the best that Kuja was able to manage was to split the vote 50-50 with Master Hand, and couldn't truly make a real push in coming back in the match. Master Hand noticed this, and continued building a lead whenever he could.

Kuja tried his damndest to do what he could, and his efforts were so good that it took two hours for Master Hand to increase his lead from 100 to 200 and keep it there. However, Kuja was slowly running out of steam, and Master Hand was able to up the pace of his push. It took a mere half hour to tack another 100 votes onto his lead, and though Kuja did everything in his power to prevent what was about to happen to him, Master Hand was eventually able to increase his lead to 400 despite all of Kuja's efforts to prevent it.

But then, the absolutely unthinkable happened. Even when Kuja was down by 400 votes, everyone still refused to believe that he would actually lose the match. No one believed that Master Hand would be able to keep this up, and absolutely no one could possibly fathom what was about to happen to this poll.

When the after school vote began, the voters didn't just side against Kuja, they absolutely buried his ass into the ground. What began as a poll that was virtually even for 12 hours soon turned into Kuja's burial ground. Master Hand turned a lead of 400 into a lead of 1000 within an hour, and it would only grow worse as the afternoon vote wore on. It took Master Hand all of an hour to turn the match into a 2000 vote lead in his favor, and it didn't take much longer for him to turn the match into a complete joke. For all the trouble Master Hand had in adding 100 votes to his lead after first taking the lead in the poll, he was soon able to pull in almost 100 votes every five minutes. The only thing the Kuja supporters could do was stare at the results in disbelief and wonder what in the hell just happened. This was the one and only true board explosion we had in the entire contest, and it couldn't have come at a better time: the tail end of round one, when we still had a bunch of people vying for perfect brackets and zero brackets. It got so bad for Kuja that he wasn't able to slow Master Hand down until he was losing by 5600 votes, and at that point he spent the next two and a half hours shaving off a grand total of 100 votes from the lead. However, it wasn't enough to save face. Kuja went from being a possible favorite in his fourpack to the joke of the contest in a span of 24 hours, and he couldn't make any excuses.

Games may not equal characters, but there are clearly enough people who seem to think otherwise. A 40% prediction percentage for a 7 over 2 upset is no joke, nor are the voting patterns. However, this match wasn't as much about Master Hand's strength so much as the fact that Kuja turned out to be an absolute joke. Square villain or not, you need to be prominent in your game to be able to do well in polls. Kuja doesn't make his first appearance until the end of disc one, and in a love it or hate it game like Final Fantasy 9, something like that can clearly have an effect. As for trying to explain how Kuja could be such a joke after seeing Vivi kick DK's face in, Vivi is goddamned black mage. You're fooling yourself if you think that that didn't help him out, plus there's the fact that Vivi is a character in FF9 that even haters of the game like. There are many possible reasons for Kuja's complete bombing, and at this point, nearly anything you or I could come up with could be a viable answer. All we know is that Kuja got his face kicked in regardless of how you look at it, and that the cursed seed in this contest was not the 3, but the 2.

This was a good way to conclude an otherwise boring first round of this contest. Low vote totals and fodder versus fodder matches were the norm in this thing, and other than Ridley/Diablo, Robotnik/Sin, and the aforementioned Kuja/Master Hand, there wasn't a whole lot going on in the way of excitement. However this wasn't CJayC or the bracket's fault, but merely the nature of weak contestants in polls. There simply won't be as much interest in a 32 character bracket as opposed to a 64, especially when nearly all of the entrants are very weak. This would grow to be an unfortunate trend in this contest, as we would eventually have no matches that were close down to the wire, and the only match with any hope of breaking 100,000 votes would wind up being the final.

Apart from a few vocal folks, practically everyone figured this match was an easy point: it’s a Final Fantasy villain against a giant hand. But said giant hand is from the flagship of Nintendo fan service, and said Final Fantasy villain is from one of the least popular installments. I don’t need to tell you what happened – Master “Kobe” Hand won convincingly and embarrassed the living hell out of poor Kuja.

This match tends to show up on a lot of people’s “worst matches of all time” list because of the result (IT’S A FRAGGIN GLOVE and whatnot), but I think it’s one of the greatest just because the result is so head-scratchingly silly that it transcends any possible indignity and becomes fun. At least it does for me. 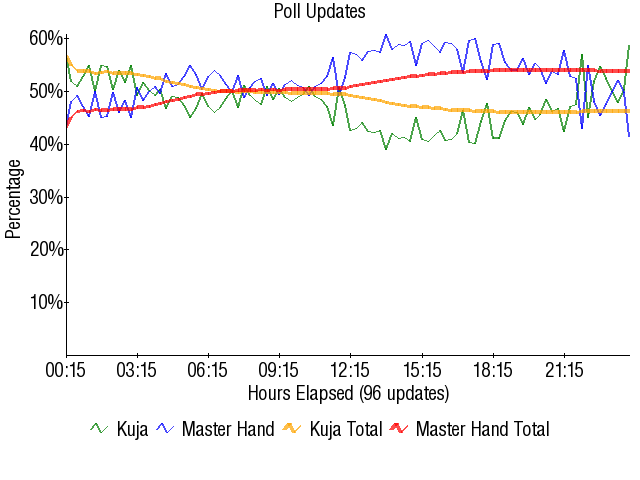 Retrieved from "https://board8.fandom.com/wiki/(2)Kuja_vs_(7)Master_Hand_2005?oldid=55973"
Community content is available under CC-BY-SA unless otherwise noted.