According to the Spring 2005 Xsts, Wesker is projected to score 41.15% on Mithos. Mithos, the guy with the sister complex who looks and talks like a girl in his own right. Not Lloyd, MITHOS.

So what does Wesker do? He goes up against the main character of Tales of Symphonia and outperforms what he is supposed to score on MITHOS. Even worse for Lloyd is that after Lloyd's initial surge of bracket votes (which barely put him over 60%), Wesker managed to cut into Lloyd's percentage like mad. And Wesker managed to win updates every now and then. No matter what type of spin you try putting on this match, Lloyd pretty much bombed. Lloyd was never in any real danger of losing despite the occasional update loss, and he eventually went on to win by a fairly comfortable margin, but he bombed nevertheless.

However, being the TOS fanboy that I am, I'll try putting a positive spin on this one anyway. Not that Lloyd deserves it given how much of an idiot he is in the game, but what the hell.

The first thing to ask is what in the world happened in Kefka's fourpack in the Spring 2005 Contest? It's easy to look at the spring stats and assume they're crap, but it's hard to believe that we'd see such a massive variation among the voter opinion within all of a month or two. However, all I can think of is that Kefka underperformed against Mithos due to a horrible pic and overperformed against Wesker due to an amazing one. I know I've been an advocate of pics not making a difference of more than 1-2%, but we've seen CT characters do some very strange things when given sprites in their match pics. FF6 is only two years older than CT, and there's also the matter of seeing Kefka bomb when given a bad picture in the past.

However, I think there's another factor that few people bothered thinking of. Tales of Symphonia only sold 350,000 copies in the States. GameFAQs is an American based site. In Spring 2005, Kefka/Mithos scored a mere 72605 votes. Lloyd/Wesker, however, scored 84794 votes. When your game only sells 350k copies in the States, you're asking an awfully large percentage of those extra 12000 people to be TOS fans (that are willing to even vote for Lloyd in the first place; remember, in the game he's an absolute idiot). It's possible that Lloyd underperformed due to his game not selling all too well and there being a very large voter pool in the match. And it's not like Resident Evil characters have a way of staying consistent in these contests, either.

I'm not saying Lloyd didn't bomb, because he did. However, there are a few vague, non-insane reasons for him to bomb if you bother looking for them. Then again, him bombing didn't matter as it was a guarantee that Zero would beat him anyway. The only thing Lloyd could hope for in his upcoming match with Zero was to do well enough to place higher than Mithos, which is a strange thing to say. And even if that were to happen, it would cause a minor issue of where Wesker belongs. 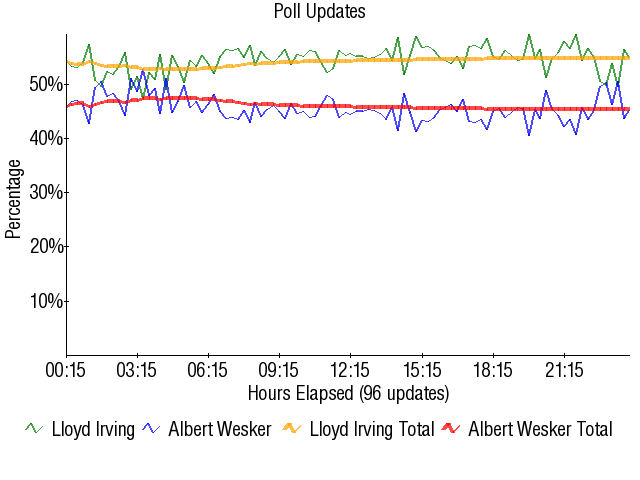 Retrieved from "https://board8.fandom.com/wiki/(2)Lloyd_Irving_vs_(7)Albert_Wesker_2005?oldid=56022"
Community content is available under CC-BY-SA unless otherwise noted.