One day after Tifa goes out and performs well past expectations, Luigi goes out and shows that Tifa might not be a lock to take him down after all. Except that in Luigi's case, he arguably had the quietest overperformance of the entire contest.

So what does Luigi do? Not only does he completely crap all over the KOS-MOS, he completely craps all over the stats. He came out with over 70% of the vote in the match, and even though his percentage leveled off not too far later, he still finished the match close to doubling a character that he was supposed to have a close match with.

Yet because Luigi bombed against Squall in 2003 and Yoshi in 2004 (and plenty of people had high hopes for Luigi in both of these matches), hardly anyone really seemed to care about how well Luigi did due to being done having any faith in the man. Yet to borrow a quote from RPGuy, when Tifa goes and wipes Vyse off the map, it's all Tifa. When Luigi goes and does the same to KOS-MOS, it's all KOS-MOS. Or Luigi's true strength being hidden behind Yoshi/Luigi SFF, or some other excuse to hide the fact that Luigi could have gone up this far. But when the Tifa > Sonic bandwagon starts, everyone breaks their ankles jumping on and off of the damned thing.

Personally, I think this was a combination of KOS-MOS dropping, Luigi joining in on a widespread Nintendo increase, and Luigi being hidden behind SFF against Yoshi last year. This isn't to say that his 2003 match with Squall wasn't proof of how weak Luigi can be or that Luigi was going to beat Tifa, but I took two things from this match. One, Luigi was going to do well against Tifa and expose her for not being as strong as her match with Vyse suggested. Two, this was one of the first true examples we had of what creativename has dubbed The Boost™, or the widespread increase for Nintendo this contest. 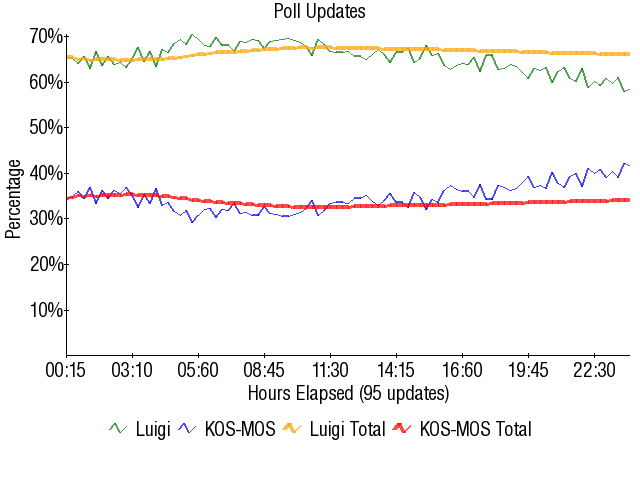 Retrieved from "https://board8.fandom.com/wiki/(2)Luigi_vs_(7)KOS-MOS_2005?oldid=56078"
Community content is available under CC-BY-SA unless otherwise noted.