Another day, another overwhelming blowout that goes in the favor of the higher seed in the Hyrule division. But unlike the other matches, this one had a special meaning to it. For the first time ever, Mario managed to perform to standards against a non-Nintendo character.

In 2002, Mario allowed Servbot to get 25% of the vote against him, and he followed that up by barely doubling Morrigan Aensland. Yet somehow, he managed to turn around and blow away Donkey Kong before edging out two close victories against Cloud and Crono.

In 2003, Mario was as much a wild card as the previous year. He managed to blow away Captain Olimar of Pikmin fame before allowing Shadow the Hedgehog to score nearly 45% on him. He once against followed up his supposed underperformance by edging out Crono in a rematch of the 2002 epic before getting killed by Sephiroth in the Elite 8.

After all that, we had a few dilemmas facing Mario here in 2004. How could a character fail to blow away opponents, yet manage to turn around and constantly squeeze out close victories against the likes of Cloud and Crono? The answer was simple enough to see after this match. Morrigan Aensland and Shadow the Hedgehog truly are as strong as their matches with Mario would suggest. For the first time ever, Mario managed to make a non-Nintendo character look like fodder, and even though Mario failed in his bid to keep JC Denton under 15% until the end of the match, his blowout victory was nothing to ignore. JC Denton isn't very well-known on GameFAQs, but he stars in one of the better games out there in Deus Ex. If you like badassed characters, you'll love JC in that game. He was pulling the Neo look long before The Matrix ever even existed.

The odd one out in all of this would be Servbot himself. Personally, I think that Servbot's 25% against Mario in 2002 was the direct result of it being the first match we have ever had in one of these contests. A lot of joke votes for Servbot were cast simply because Mario's victory was never in question, and anyone who was on the boards around that time knows this. With that in mind, it's easy to throw out Servbot's performance as a fluke and to finally give Mario to credit he deserves. Not only did Mario beating JC Denton so badly prove that he is still strong, but it also gives a new respect to Shadow the Hedgehod and Morrigan Aensland. We need Morrigan back in the contest, plain and simple. 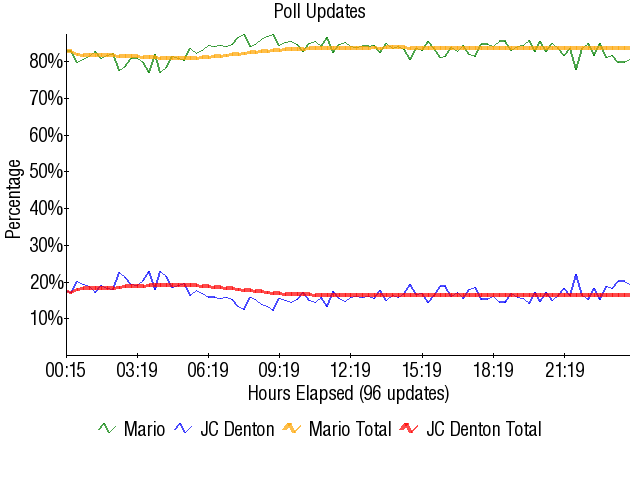 Retrieved from "https://board8.fandom.com/wiki/(2)Mario_vs_(15)JC_Denton_2004?oldid=55800"
Community content is available under CC-BY-SA unless otherwise noted.