Like a lot of Phoenix Wright matches, it felt like the pre-match debate was how any of the three characters could win this. Phoenix and Marth have been close in the stats for years, and Soul Calibur's scare of Kingdom Hearts in 2004 paired with fighting game characters being unpredictable made a decent case for Nightmare doing something here. Personally, I never felt like this was going to be much of a match. Phoenix Wright having joke trends ended awhile ago, and him getting popular enough to get into Ultimate Marvel vs Capcom 3 really ought to speak for itself. I think Marth being in Smash makes hype for him grow higher than it should be; Marth isn't really a strong character, and he sucks as a lord in Shadow Dragon anyway so screw him.

When the match finally hit, the first thing that stood out to me was Nightmare being so unbelievably awful. This gave credit to the theory of "last place factor", which is the theory that unless a character can threaten to win a multi-way poll, they will underperform. I actually do put a lot of validity into that theory, because it does show up a lot. It's hard to back up statistically, but the eye test speaks for itself in a lot of these multi-way polls. Doesn't it often feel like the character in last place sucked more than they should?

The other thing was Phoenix Wright not really slowing down once the "joke phase" ended. He started well, and even though Marth scored 44% on him by match's end, this was never close. The fact is that Phoenix Wright is no longer a joke character, which he would end up proving a hundred times over in round 2. Because while a few select people had the big Mewtwo > Vincent upset, a third character did have to share the poll with those two ;)

I thought people on this site liked Fire Emblem? I guess there's some crossover with Phoenix Wright?

Jeez, look at those votals. It's nice seeing an "upset" from Phoenix, I know some people were putting him below Nightmare for some reason. Nightmare has had some decent showings before, but it was mostly decent bracket placement and taking advantage of a multi-way format that helped him out.

In the end, Phoenix's loyal fanbase (mostly us) were able to give him the win. If this match happened in 2018, who knows what would happen? I'd say these dudes are pretty close in strength, so it would be hard to predict if this happened again. Phoenix's rabid fanbase has dissipated a bit but Fire Emblem has all those games where you can make cousins fuck or some weird anime BS that people like.

Side note: I made this Nightmare pic and people HATED it because his arm wasn't in it enough and they said it would ruin his chances. I ask anyone, ANYONE who makes pics to make a Nightmare pic in those tiny, slim dimensions and make that arm the centerpiece without it looking like a weird brown blob. People are too fickle with these things, Nightmare looks like a goddamn lump most of the time anyway: 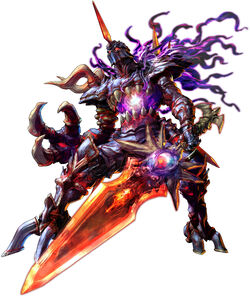 Retrieved from "https://board8.fandom.com/wiki/(2)Phoenix_Wright_vs_(17)Marth_vs_(26)Nightmare_2013?oldid=82117"
Community content is available under CC-BY-SA unless otherwise noted.