When the bracket was first released, this was viewed as the match of the entire contest. The seedings were completely meaningless in this matchup, and though this match had its fair share of disagreements, nearly everyone at least agreed on that point.

This match was not widely debated simply because it was difficult to predict, but the fact that the winner of the Bison/Ridley/Diablo trio had an excellent chance to take down Kefka in the divisional finals. Kefka showed no signs on being worthy of the win in his match against Mithos, and it only made this match mean that much more.

The premise was simple. No one allowed themselves to forget about the amazing run that Starcraft had in the Spring 2004 Contest, and though games are generally =/= characters, denying that games play a large part in character strength is foolish. And in Diablo's case, he hails from a series that is more popular than Starcraft in America. It is extremely rare that you'll see more games of Starcraft being played on Battle.net than you will Diablo II, and this is no accident. Neither Diablo nor his games are weak by any means, and when you factor in that Diablo the character and Diablo the game share the same name, Diablo's chances of being a powerhouse in his division were that much better.

Another good point for Diablo is that the Metroid series isn't exactly the type of series that lends itself to massive mainstream appeal. It's not a cult series by any means, but it's likely pretty niche. Many people in Europe and Japan haven't even heard of Metroid, Samus, or Ridley, and Metroid's main source of popularity is in America, the same country that prefers Diablo 2 to Starcraft. It's also very likely that there is a massive dropoff in the popularity of Metroid characters after Samus, simply because the games aren't about character or character development; they're about Samus beating the living hell out of anything stupid enough to move. Diablo may be little more than the character that you fight at the end of the Diablo games, but he is extremely prominant in the game's story as you play through it. The same cannot be said of Ridley, who is little more than a recurring, oft nameless mid-boss in a few Metroid games. He's mentioned by name twice in the entire series, and I'm willing to bet that a good number of people who have played Metroid don't know that Ridley is the leader of the Space Pirates. He's simply not very prominent in his games, whereas Diablo is. And if these character contests have taught us anything, it's that you almost have to be prominent in your game to be a strong character in these contests. I'm sure there are a couple of exceptions, but not many.

Diablo as a series is more popular than Metroid as a series, Diablo's sales to release ratio flattens Metroid's sales to release ratio, Diablo is far more a factor in the story of the Diablo games than Ridley is in the Metroid games, and Diablo had other advantages going into this match as well. He had the mainstream advantage, series popularity advantage, and name advantage ("Diablo" is much more well-known a name among the gaming community than "Ridley"). By the time the match started, Diablo had the picture advantage. Only one good picture of Ridley exists, and CJayC didn't use it.

Diablo also had the advantage in the intangibles department. Diabloii.net and its 2000 hits per day could be all the difference in a close match, assuming you believed that Diablo needed outside help to win this in the first place. The only things Ridley had going for him were his seeding and company affiliation. Diablo had everything else.

The only thing left to do was to start the match, and once things got going, Ridley found himself in the lead for all of 60 seconds. Ridley managed a minor early lead thanks to a small advantage in board/bracket voting, but Diablo quickly recovered to even things up and take the lead in the match. Ridley tried to recover, but the best he was able to manage was to stall Diablo. Diablo took all of Ridley's early heat, fought through it, and slowly began building a lead in the poll. Within 15 minutes, Diablo had a 100 vote lead. From there, this pattern continued. Ridley managed to constantly stall Diablo, but that was the best he was able to manage. Every time Ridley tried to make a move in the match, Diablo persevered, hung tough, and continued building upon his lead after Ridley was worn down.

Before long, Ridley finally ran out of gas, and failed to stall Diablo for much longer. Diablo caught fire after the first few hours of the poll, and Ridley was unable to keep the match close. Diablo turned a close match into having over 56% of the vote and a lead of well over 1000. At around 8 in the morning, Diabloii.net caught sight of what was going on and posted a link on their site, effectively ending any chance Ridley had of winning this poll. Ridley fought valiantly early on, and made a good effort to keep the poll from turning into a complete joke, but Diablo would have the last laugh as he cruised to a victory of over 11000 votes and over 57.5% of the total vote share. What began as a match that lived up to its hype turned into an absolute killing of Ridley, and in an odd turn of events, it turned out that Diablo didn't need outside support to win. He had over 56% of the vote before diabloii.net linked to the poll, and by the end of the poll, Diablo had 57.5% of the vote. That isn't a large difference, and watching Ridley supporters whine about outside support while failing to realize that the dragon had already lost well before the link was a joy to watch.

Next up for Diablo was a very intriguing match with M. Bison. Bison looked prime to win the entire division early in his match with Albedo, but his percentage drop throughout that particular poll made their round two matchup anyone's game; at least, it looked like it was anyone's game. 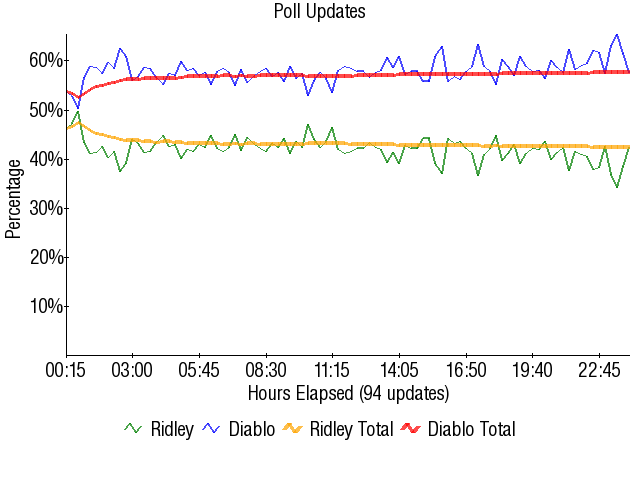 Retrieved from "https://board8.fandom.com/wiki/(2)Ridley_vs_(7)Diablo_2005?oldid=67773"
Community content is available under CC-BY-SA unless otherwise noted.