After Bowser spent an entire 24 hours leaving us wondering whether or not his performance in the spring was truly something special, Ryu decided to answer all of our questions for us.

For those unfamiliar with who Rikku is, she's that loud-mouthed girl in FFX that serves as a horrible form of comedy relief in the game. Really, she's got jack squat on Ultros or Gilgamesh. And then Square decided to put her in FFX-2 and show her "true personality" (which didn't change, mind you; she just wore less clothes). To this day, I have no clue how I managed to get a 100% in that game without ripping out my eyes.

Anyway, to the point. Bowser did what he was supposed to. In fact, some would argue that he did less. Ryu could have gone out there and proved that the Dream Division was his for the taking, because frankly, everyone thought that this division was going to come down to the Bowser/Ryu match.

So what does Ryu go out and do? He absolutely and completely ****ing chokes. Possible FFX-2 affects aside, the board expected Ryu to do rather well in this match (the average Oracle pick was 62.17%) and prove that we were perhaps overestimating Bowser based on the spring.

Not only did Ryu not come close to breaking expectations, but the rate that he started bombing in the match was alarming. It took less than ten minutes for a board vote that had him at nearly 70% to push him under 60%, and his percentage gradually dropped throughout the day. If you stare at the updater long enough, you'll occasionally see Rikku going 50/50 with Ryu in an update or winning an update outright every once in a long while.

Rikku. Going 50/50 in spots against Ryu, the same guy who has broken 40% against three different Noble Nine characters, the same guy who almost upset Sonic, and one of the brick walls of consistency in these contests. Some people blamed this entire thing on TJF and/or FFX-2 while still trying to justify Ryu > Bowser, and I laughed quite hard in these cases.

For the record, even if you want to blame this match solely on FFX-2 while leaving Ryu constant, you'd have to convince yourself that Rikku was as strong or stronger than Tidus and that she had a good chance of breaking 48% on Auron. According to 2004 stats, at least.

The 2004 stats may be completely screwed up, but not even I'm willing to say they're that screwed up. Either Ryu dropped and had no chance whatsoever on Bowser, or Rikku just happens to be as strong as the two most popular characters in her game despite arguably getting the least amount of character development out of any of the cast in FFX.

Yet people actually bothered arguing Ryu > Bowser after this. Hilarious. This whole thing eventually led into a discussion in which I asked Slowflake if I could laugh at him if Bowser won.

His response? "You can laugh at me if Bowser kills Ryu and comes close to breaking 60%, how about that?"

Paraphrased of course, but still hilarious. 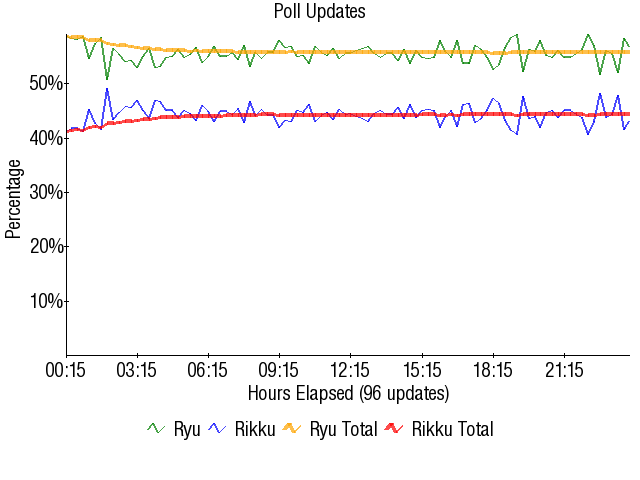 Retrieved from "https://board8.fandom.com/wiki/(2)Ryu_vs_(7)Rikku_2005?oldid=56047"
Community content is available under CC-BY-SA unless otherwise noted.