The first round of the Summer 2004 Contest ended with a surprise blowout of sorts. Everyone knew that Samus was going to win this match, but the sheer dominance that she showed in beating the holy hell out of Lara Croft raised a ton of eyebrows. Samus began the poll on fire, and she simply did not let up until the match was over.

To put this in perspective, Samus had never managed to break 80% in any match she had ever been in in the past, even against Isaac.

Samus clearly suffers from unaccounted SFF in the 2003 Xsts, but nothing could have possibly accounted for Samus suddenly gaining the strength to be able to break 80% with ease on Lara Croft, a former 1 seed in the contest. No amount of unaccounted SFF can possible hide the fact that Samus didn't just go up between 2003 and 2004, but she flat-out exploded in popularity between the two years. The question as to why remains unexplained to this day (Metroid Prime/Fusion were released before the 2003 contest), but the rise is there. In fact, if you go by 2003 stats alone, then Samus --- not Cloud, Link, Sephiroth, Mega Man, or anyone else --- but Samus, would be expected to win the contest with absolute ease. It's inexplicable, but for us Samus fans, it was a beautiful sight to see =)

On the other side of this, what ever happened to Lara Croft? It certainly takes quite the fall from grace to allow Samus to score 80% on you, but considering that Lara was once recognized as being more popular than Mario himself by the Guiness Book of World Records, as well as the fact that she was once a 1 seed in the contest, a match like this says that she may very well be on her way out the door. Even Pac Man has been able to retain some shred of dignity after falling from his former 1 seed grace, but Lara has seemingly given up ever trying to do any damage in these contests again. She may not be coming back, and to be honest, I doubt anyone will care after she's gone. 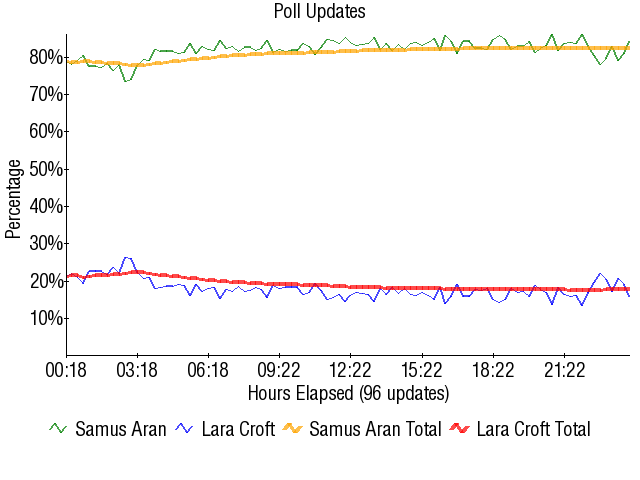 Retrieved from "https://board8.fandom.com/wiki/(2)Samus_Aran_vs_(15)Lara_Croft_2004?oldid=55848"
Community content is available under CC-BY-SA unless otherwise noted.