Albedo vs M. Bison was Vergil vs Ghaleon all over again in that as the match drew close, meaningless hype began to take over. The winner of this match was clear as day, especially if you're a fan of using old polls as a guide: http://www.gamefaqs.com/poll/index.html?poll=1743

M. Bison may not be nearly as strong as Ryu, but asking Albedo to make up a difference of nearly 25% when he's weaker than KOS-MOS is absolutely ludicrous. Furthermore, though Albedo clearly has a dedicated fanbase behind him, they are a very small fanbase. Xenosaga's sales aren't too impressive, and through the first 15 hours of the game, you see Albedo how many times? Twice? And all he does is laugh manically, then walk away. You have to suffer through quite a lot of boring gameplay before ever actually seeing Albedo do something noteworthy, and there aren't enough of these people out there for Albedo to even have a chance against Bison, let alone beat him. Albedo is another example of a cultish non-Square RPG character with expectations beyond his ability, and had absolutely no chance of winning this match. You have to go pretty far down the Street Fighter ladder before finding someone that Albedo can actually beat.

But Albedo fans chose to ignore the obvious, and were up for quite a shock when the poll began. Not only did M. Bison begin the match on fire, but he absolutely kicked Albedo's face in early on. Most people with any degree of common sense expected Bison to win the match, but hardly anyone expected Bison to flat-out kill Albedo in the match. At one point, Bison looked like he had the potential to break 75% in the match, and his performance was so amazing that it drew out the best night of fads that this contest had to offer.

Of course, Albedo did wind up getting the last laugh in this match. Few people bothered to notice during the day of fads, but M. Bison went from pushing 75% in this poll to gradually losing percentage throughout the day to the final result you see above you. Few people thought that this would make much of a difference and proclaimed that Bison was a very real threat to win the division, but the percentage loss that Bison suffered in this match would come back to bite him in the ass later on in this contest.

Not that it made his match against Albedo any less fun, mind you. PSYCHOOOO CRUSHAAAAA!!!!11! 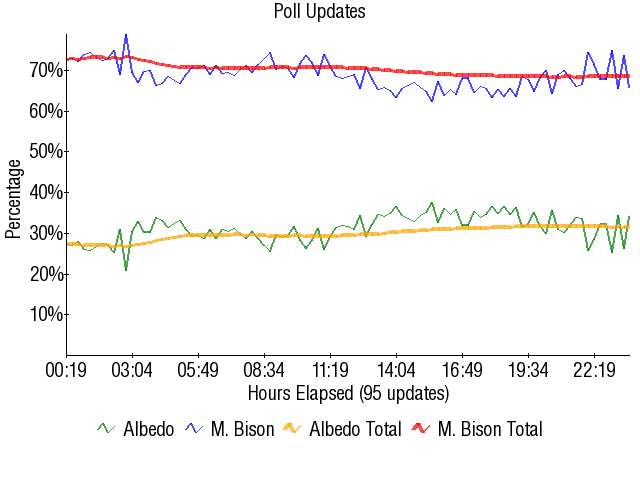 Retrieved from "https://board8.fandom.com/wiki/(3)Albedo_vs_(6)M._Bison_2005?oldid=55962"
Community content is available under CC-BY-SA unless otherwise noted.