"My legs, I mean. I just went running. My left leg felt like it was dead before I even started, and my right leg felt like something stabbed it all the way through afterwards." -Weaku

This match was all about setting up for the highly debated Auron vs Squall affair in round 3, but Aeris not making the field in 2008 sort of messed the expectations up. If you go back to 2007, Ngamer's LOL x-stats calculator has Auron getting 59% against Aeris. The 2007 stats are warped beyond belief, but upper 50s is a realistic expectation for Auron in this match.

And Auron more or less did exactly as expected. This is fine if you're just looking to get wins, but Auron was looking to score an upset over an upward-trending Squall this year. As-expected doesn't really get it done, though we hadn't yet seen what Squall would do. The whole Auron/Squall debate comes down to whether or not Auron's upset over Sonic in the LOL 4ways was legit, but we now know the 4way results are practically dismissible. Not to mention, Squall probably does the same thing in Auron's position last year.

By the way, it's still "Aeris" and always will be. Blame Japan for having a terrible language that makes no sense. "su" can have two identical meanings for whatever reason, but a better explanation can come from one of those Japanophile freaks. You know, the bad hygiene, no-friends people who cling to that I'M MOVING TO JAPAN SO KAWAII ANIME RULES I STUDY KANJI notion.

Here's a great look into how terrible Japan really is: http://kotaku.com/5484581/japan-its-not-funny-anymore

I have friends who actually made the mistake of moving there. Every single point in that article is 100% true. But hey JAPAN MAKES ANIME SO THEY MUST RULE. 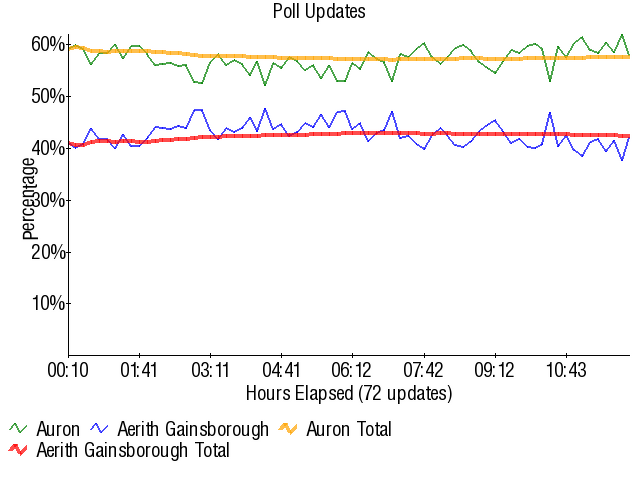 • Previous Match       • Next Match
Retrieved from "https://board8.fandom.com/wiki/(3)Auron_vs_(14)Aeris_Gainsborough_2010?oldid=59190"
Community content is available under CC-BY-SA unless otherwise noted.