When the bracket was first released, Bowser vs. Ryu looked like it could shape up to be an excellent match. These two characters were ranked right next to each other in the SC2K3 x-stats, and possibly in the SC2K4 x-stats. (Bowser's position in 2K4 is difficult to gauge due to the SFF beating he received at the hands of his arch-nemesis, Mario.) despite being ranked slightly lower than Bowser in 2K3, Ryu has also held his own against the elite characters; scoring 42.2% on Samus in 2K2, 42.74% on Snake in 2K3, and 44.46% on Sonic in 2K4. in fact, Ryu even stayed dead even with Sonic for the first 2.5 hours of their match. however, Bowser really impressed in this past Spring's Villains Contest when he managed to break 40% on Sephiroth - no small feat.

In the day leading up to the match, very little was discussed about the match, even though it's supposed to be the fifth consecutive match of the infamous Gauntlet, which wasn't really living up to its hype. the main discussion in the Stats Topic that was relevant to the Bowser vs. Ryu match was whether or not Kirby's impressive performance against Tidus was further proof of a site-wide Nintendo boost. many in the topic figured that it was, and most agreed that Bowser would continue Nintendo's string of dominance. in fact, not one of Moltar's analysist crew members went with Ryu and only 2 of the 7 predicted Bowser to finish under 54.5%. the general consensus prediction seemed to be that Bowser would take the initial board vote, followed by Ryu pulling even or taking a slight lead with the late night vote, only to have Bowser pull far away with the typical Nintendo morning and day vote.

Would the match live up to its pre-contest hype, or be over within the first hour, just like the preceding 4 matches of the Gauntlet?

The board vote began and to the surprise of no one, Bowser shot out to an early lead. Ryu managed to increase his percentage by a few points to stabilize the match at 56/44 after about an hour, but the infamous Street Fighter 2 early morning vote never arrived. once again, the match was over immediately after it started. as the underwhelmed residents of Board 8 trickled off to bed, many of them hypothesized about whether or not this match was ANOTHER piece of evidence towards a site-wide Nintendo boost. without coming to a definitive conclusion yet, many people throughout hoped that MC vs. DK would wind up closer than the matches of the Gauntlet.

Bowser began increasing his lead throughout the anti-climatic day, just like he was expected to. yawn- towards the middle of the match, though, Bowser came close to breaking 61%, raising the level of confidence of the minority who chose Bowser to upset Snake. after the uneventful day, Ryu did manage to bring Bowser's percentage down to 59%, even winning a handful of updates.

But, hey, at least Ryu was able to remain in that select group of star performers who have been in all 4 summer contests and scored above 40% in every single one of their matches:

Link, Cloud, Sephiroth, (if you count the ToC), Ryu, and Gordon Freeman.

What a group of winners. 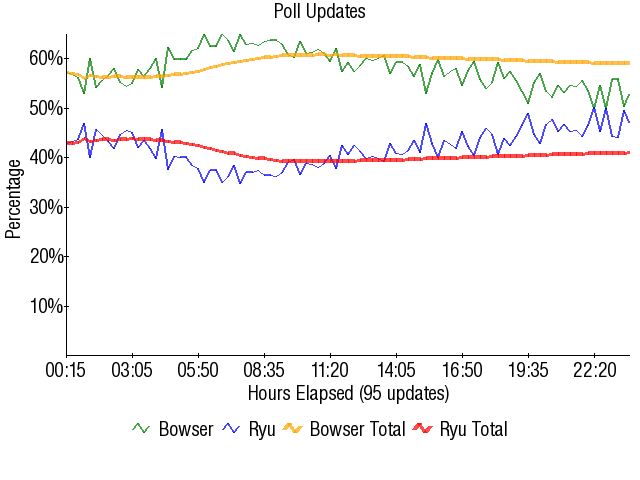 Retrieved from "https://board8.fandom.com/wiki/(3)Bowser_vs_(2)Ryu_2005?oldid=67792"
Community content is available under CC-BY-SA unless otherwise noted.