From: Tai | Posted: 5/12/2005 8:18:12 PM | Message Detail
I say Sin. He comes from the mighty series that is Final Fantasy. People argue Dr. Robotnik is simply more recognizeable, so he should win. What about Pac-Man? Scorpion? Donkey Kong? Didn't they..all..like..get creamed by Square characters? Man, that must suck. :-( Also, think Crono and Mario. Mario has been in so many more games than Crono that EVERYONE must know who he is. Hell, Mario went to the Finals last year. But, Crono? I've heard he doesn't even talk. I guess all the girls like his hair because it looks like Goku's a little, right? Yet, somehow, he rivals to Mario. If that can happen, any "ugly" character can beat a popular one. Also, Sin comes from the game, FFX, which features Tidus, who beat Shadow last summer. So, what can a mere fat loser do against this Final Fantasy character?

People think Sin will be crushed because he's a whale. Well, I guess this means the fat scientist will be CHEW'D UP AND SPIT'D.

In this topic, it's simple. Vote for a villian.

This was one of the many idiotic Tai (a redundancy, I know) topics leading up to that match, and virtually all of them were written with the same degree of analytical skill as the one you see here. But we'll get to that in a minute.

The ironic thing is that there actually was a good reason for thinking that Sin was going to win this match before this contest started. The weakest Sonic character in the 2003 stats is Tails, and the weakest FFX character is Yuna. Tails made a minor jump in popularity between 2003 and 2004, but even then, if Sin and Dr. Robotnik were at all comparable to Tails and Yuna, one could argue that Sin had the advantage despite Robotnik obviously having a bracket advantage going into the match. There was also the matter of Wily/Ultros. Assuming Robotnik was somewhat even with Wily in strength, asking Sin to be 15% stronger than Ultros wasn't that much of a stretch. I myself thought that this match would be close, but it would be Tidus/Shadow close in Sin's favor. I was right, but picked the wrong character =p

Of course, knowing that Sin was already up for a tough road in the match, all hope of him actually winning went down the drain when the match picture came out and we saw Robotnik in all his glory versus a dorsal fin. Not that this took away from the fact that the entire board was in a win-win situation, because thanks to Tai's wonderful little topics every other day with insane predictions of Sin with 58% of the vote, even those who had Sin winning the match could sit back and enjoy themselves.

When the match finally started, Robotnik flew out of the gate for 65% of the vote early, and though Sin eventually regained some of his footing, he did little to nothing to prevent Robotnik from steadily increasing his lead. Robotnik's percentage was slowly falling from the 65% he had initially, but he managed to build a lead of 2700 votes through the first 15 hours of the poll.

Of course, this caused Tai to absolutely lose his mind. Not only did he attempt to rally votes from other websites singlehandedly, but he took his loss in a worse way than virtually anyone else ever has. When most people make vocal picks that are wrong, they sit around and laugh with everyone else when the time comes to have their picks thrown back in their face. It's all part of the fun. But not Tai, oh no. Rather than simply taking a joke lightheartedly, he decided to mark everyone to death, then keep track of the messages that weren't deleted so he could archive them and run off to MBH and Message Detail 2. It was arguably the worst case of bad sportsmanship we have ever seen, and only Blackscar's prime and red13n's wonderful habit of running around deleting whatever messages he doesn't like can compare. What began as a fun day turned very sour very quickly, all because of people who like their Message Detail button a little too much.

Lost in all of this was the fact that Sin truly did make this a Tidus/Shadow affair. He had little chance of coming back and winning, but he did turn a 2700 vote defect into a respectable 1900 vote loss. It makes you wonder what might have happened if Sin didn't have the worst picture of the contest, because knowing what we know now, all those people who had Sin winning the fourpack may very well have been screwed by one of the worst match pics we'd ever seen. 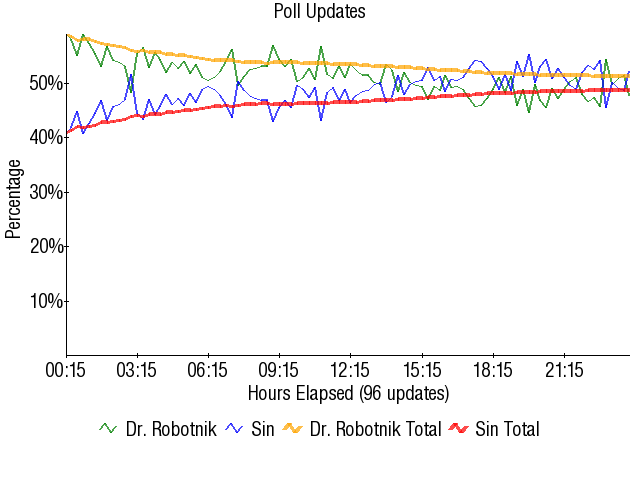 After the match pic came online and Ngamer realized that CJay had just killed his bracket, Ng took advantage of the general uproar on the board and created this image, calling it an alternative poster for Sin City. No one liked it, but he thought it was hilarious, so he didn't care!

The awful pic also resulted in one of the better topics of the season, when The Real Truth put up a thread called Sin the Fin for the Win. The original topic can be viewed at

Some of the better replies:

Yeah, let's toss Robotnik in the bin!
*kicks you in the shin*
Now, that's an interesting spin...
Now I need some jin :(.
This topic makes me grin.
Robotnik has a weak chin.
What % are you expecting for Sin? I bet 51% is his min.

Retrieved from "https://board8.fandom.com/wiki/(3)Dr._Robotnik_vs_(6)Sin_2005?oldid=55972"
Community content is available under CC-BY-SA unless otherwise noted.