This is it; for those who remember the pre-contest hype, this match was the beginning of what was supposed to be a terrific string of matches, "The Gauntlet." With Ganondorf/Auron, Solid Snake/Zelda, Alucard/Sora, Kirby/Tidus, and Bowser/Ryu, this was supposed to be the greatest string of matches since 2k2 (where we got Sonic/Samus, Sephiroth/Mega Man, and Mario/Cloud...Crono/Solid, too, if you fancy). While the BOP heavily favored Ganon, many agreed the match was going to stay close, and some who didn't changed their minds when they didn't see Ganon impress against another FFX-member, Yuna, in the first round. Seeing Auron decimate Big Boss didn't exactly boost confidence amongst Ganon-supporters, either.

However, once the match started, it got out of hand early; five minutes into the match, Ganon already had nearly 66% of the votes. Many people expected Auron to take the board vote, or at least go even with Ganondorf...but he took it and ran like hell (like nearly all the other Nintendo characters did; I think only Tifa/Luigi and Sephiroth/Mario didn't in all of Nintendo's matches). Now, of course, Auron naturally brought it down to a much more realistic percentage (at one point, Auron had 47.77%), but he ultimately failed to bring the kahunas to back up the hype. He showed he had good strength behind him (as could anybody who can understand Cloud/Auron in 2k3 and Auron/Sephiroth in 2k4 had SFF), but it wasn't as much as many of us once thought. At least there is now a more solid number on him than what we had the past two years, though Ganon is always controversial; whether it's being in Magus's four-pack in 2k3, the infamous Link/Ganon annihilation, the validity of the Villain Contest, or facing a potential SFF'er in Samus right before Mario/Samus, it's entirely too difficult to get a true consistent number on Ganon.

In a sense, it's good news for fans of both of them; Auron proves he's got true strength, and Ganon gets his first Sweet Sixteen appearance (though, with better placement, he could have arguably gotten as far as the Final Four). With Samus next in line though, he had nowhere further to go. He has enough to be proud of though; thanks to his second-place run in the Villain Contest, this earned him a LOT of bracket-support. 67.25% of the brackets didn't think Yuna, Auron, or Big Boss would beat Ganon, which only continued to show that people paid attention to the Villain Contest...not that people didn't already know him or think he was strong, mind you, but this spring made alot of people into believers. This would show again in the next round with the drop-off in Samus's prediction-percentage, too.

As a fun lil' note, Ganon had beaten down three FFX members (Tidus, Yuna, and Auron)...and his three matches, by themselves, would lead you to believe that Tidus > Auron > Yuna. Ganon was 1,918 votes away from getting to beat Sin, too, if you check the Villain Contest close enough. 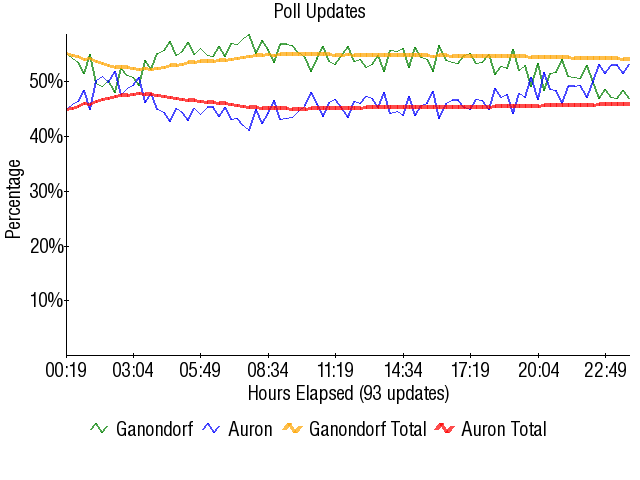 Retrieved from "https://board8.fandom.com/wiki/(3)Ganondorf_vs_(2)Auron_2005?oldid=56094"
Community content is available under CC-BY-SA unless otherwise noted.