"It's a shame that Peach isn't facing someone weaker in round two so that more people can get burned by picking her." -Leonhart4

I'm making this topic to laugh at everyone that picked Peach. From Valvoras Posted 10/16/2006 8:07:30 PM #001 That's right. I laughed at those of you who took Celes, Cortana and Phoenix Wright. I proved my superiority to those of you on all three occasions. Now it's time for a more daring topic but with the same result. Jill Valentine is a lock to defeat Princess Peach. Jill is a decent mid-carder, nobody likes Peach. She'll be Wario-esque. You were fools to take Peach, say goodbye to 2 points.

So anyway, this was a debated match for awhile before the contest began. Then Jill went into the tank against Sheena, followed by Peach just killing Daisy and the hype died off completely. That said, Jill supporters had a good reason to think she would win the match; I love Peach and all, but outside of Mario 2, SSBM and SMRPG, she's nothing more than an avatar. And past polls do suggest that the Mario fans care about her as such. A good case could have been made for either girl winning this match. It's a shame I haven't played any of Jill's games yet, because she seems like the type of character I would like. Dammit Ex, get me RE2 :(

When the match began, Peach made it look like Jill's collapse against Sheena was in fact imminent of things to come. She took the early (though not exactly killer) lead, and led by 450 in under 45 minutes. It would not last however, as Peach's early run was another example of the Nintendo Power Hour in action. Jill got Peach's lead under 400 by the end of the hour, then the two stalled for an hour longer. Once the night vote kicked in, Jill used it to make her move. From 2 to 3, Jill brought Peach's lead all the way down to 229. An hour later it was a paltry 27. Jill took over the match and increased her lead all throughout the night. By the time the morning vote hit and Peach decided it was time to pull her head out of her ass (which would be a rather difficult feat, come to think of it <_<), Jill's lead was over 550. Peach made a small push during the morning vote, but she was never able to get Jill's lead under 300.

The Nintendo children had to go to school some time, and that's when Jill really brought the pain. In the six hours between 9 a.m. through 3 p.m., Jill's lead went from 345 to 1400. Barring a miraculous and borderline psychotic after-school vote for Peach, this match was over.

And then Peach took off 70 votes in the next 5 minute update. No big deal though, as Jill took half of that back over the next ten minutes. But then Peach took off 50 votes. Then 36. then another 50. In the blink of an eye, Jill's 1400 vote lead was back to triple digits and collapsing fast. It was Jill vs Sheena all over again, only with a match truly on the line this time around.

The after-school vote favored Peach so heavily that it took Peach less than four hours to blast away a 1400 vote lead. Jill made several stalls during her collapse, but it wasn't close to good enough. She also made a few stalls as Peach was building up a lead of her own, but it still wasn't good enough. Or so we thought. Despite Jill's best efforts, Peach had a 300 vote lead with three hours left in the match.

Remember Ryu Hayabusa vs Jill in 2004? Kind of impossible to forget if you were there. In a match eerily similar to Jill/Peach, Ryu and Jill went back and forth all day long, with Ryu seemingly getting the best of the match at the end. But Jill had one last run in her thanks to the RE night vote, and she made a near-historical march to victory when she came back from down 200 or so with 30 minutes left. She would go on to lose by a mere 27 votes. I don't know the exact extent of Jill's final push, nor am I opening up the poll updater to find out. That thing is a monster, and always crashes my computer when I open it :(

People brought up Ryu Hayabusa with reference to Jill possibly coming back against Peach, with the main difference being that Jill's other comeback came in the dead of night. Surely she couldn't come back against a Nintendo character with everyone still awake, ja?

Jill made a decent attempt at it early; in the first of those three remaining hours, she brought Peach's lead from 305 to 263. It could have been worse, but Peach managed a stall or recovery whenever Jill made a push. The 22nd hour of the match looked much the same, until Jill managed to take off 65 votes in a mere 10 minutes. Amid legions of cheating accusations that sprung up (and for good reason), Jill was slowed down once again by Peach. She made a decent recovery in getting her lead from 160 to 200, and at this point every vote mattered.

And then the final hour of madness came. In a mere 30 minutes, Jill brought Peach's lead from 200 to 87. With 30 minutes left, it was a mad dash to the closing bell, with Jill holding a big edge at the beginning. She killed 50 votes from 23:30 to 23:40 to bring the lead down to 37, and it looked like Jill had this thing all but won. But Peach made her most timely recovery of the entire match; from 23:40 to 23:50, she increased her lead to 73. Jill brought that thing down to 56 in the next 5 minute update, but 56 votes in the final five minutes was a massive stretch.

Jill would take off a huge chunk of that 56 however, and ultimately lose by.... 27 votes. Again.

If you thought Jill supporters would take this thing quietly however, you wish. But let me back up for a moment. The cheating accusations from Peach's side were more than accurate. Skip ahead to Ceej's topic after the match.

CJayC | Posted 10/17/2006 9:23:48 PM | message detail An in-depth analysis shows lots of back and forth, lots of rallies, but no individuals who managed to alter the results of the contest.

Not that they didn't try, of course.

The "cheaters" vote-stuffed for Jill by only an extra 4%, but that would have been enough to tip the balance if we didn't have measures in place to block it. Of course, none of those votes actually counted, as did none of the votes from the three users were axed for vote-stuffing; all three for Peach.

Accurate but not wholly valid, if you believe that post 100%. Then again, who knows if Ceej's security is 100% accurate; he's never really mentioned what methods are in place, for obvious reasons. As for whether any cheat votes went through or whether Ceej had a hand in the outcome of the match, we'll never know. It's worth noting however that the poll update times were going haywire all day.

But anyway, yeah, Nintendo fans aren't the most mature out there, but the anti-fanboys are much worse. Between Vlado's constant whining and Valvoras's lovely "Jill will win" spectacle, it's a wonder anyone bothers posting on Board 8 anymore. It's always nice being called mentally challenged over your taste in gaming characters. But on the bright side, check this gem out:

As for what to make of the match, it was a classic in every sense, and all the people who said it was a tossup were correct. Peach just had more in the tank at the end, and she can definitely thank a combination of NintendoFAQs, SSBM and Jill not being in RE4 FTW. And Peach getting this far was all I really wanted, because I knew she had no chance against Tifa. I also didn't care about her upcoming loss after a win like this =p 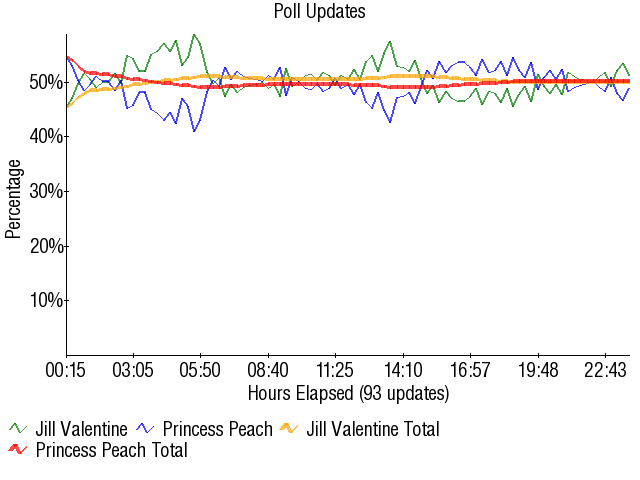 This match saw a lot of cockiness on both sides (anyone remember Valvoras?), but the end result proved to be as much of a tossup as you could get. Now I know this match had lots of lead changes – Peach in the beginning, Jill in the morning, Peach afterschool, and Jill with a final push at the end that was preposterously intense and made her lose by a margin of 27 votes… which was the exact same margin she lost by two years ago against Ryu Hayabusa. Jesus. This match was crazy excitement and didn’t seem to let up, as the voting demographics kept bringing in new voter pools and such.