No, not Tales of Symphonia Kratos. This is the guy who was smart enough not to accept coffee before the sex.

After the Frog/Riku debacle, it was extremely difficult to imagine Alucard taking down Sora. It made his match with Kratos relatively pointless, though it was a chance for Kratos to show his potential in these contests. Sony may not be able to produce hardware that works (because God knows that their TVs, computers, stereos, and post-PSX gaming systems are lucky to last for two years before having problems; but hey, at least they make good CD players, and dammit, that's what matters), but when they decide to make games, they usually strike gold. ICO and God of War have received critical acclaim from all over the gaming community, and Shadow of the Colossus may do the same if they ever get the controls worked out. Counterintuitive horseback controls are beyond stupid when you're trying to traverse on something that's actively trying to throw you off of it, but I'm getting way off the subject.

The funny thing about this match is that it's the battle of characters from critically acclaimed niche masterpieces. Sure everyone knew that Alucard was going to win, but by the end of the match, Kratos would be the one with the last laugh. Beginning the match well under 40% and then using a strong day vote to bring the heavy favorite down to 55.5% tends to do that, especially when you win an update every now and then. Kratos being from a recent smash hit and going against a guy who people still can't recognize (I swear, the next person that makes a "Who is Alucard?" topic in the middle of one of his matches gets kicked in the crotch; he's beaten Tails, Duke Nukem, Kirby, Bomberman, and Kratos; LOOK HIM UP, for crissakes) perhaps did him some good, because when the casuals began to vote, Alucard's percentage went down. I know that most of us like Alucard and The Plan, but there are only so many Get Out of Jail Free cards you can hand out.

Yes, God of War is a recent hit. Yes, SOTN and Alucard aren't getting any younger. And yes, Kratos is an untested character who may very well have been every bit as strong as this match suggested. But Alucard/Sora was one of the most widely debated matches of the contest, and for Alucard to swing 55% on Kratos after what Riku did was nothing short of disappointing.

Though despite this, one could still make a halfway decent case for Alucard in the next round, if for no other reason than Kratos's recency causing an overperformance. Maybe. either that, or this match was a sign of Alucard finally starting to show signs of aging. 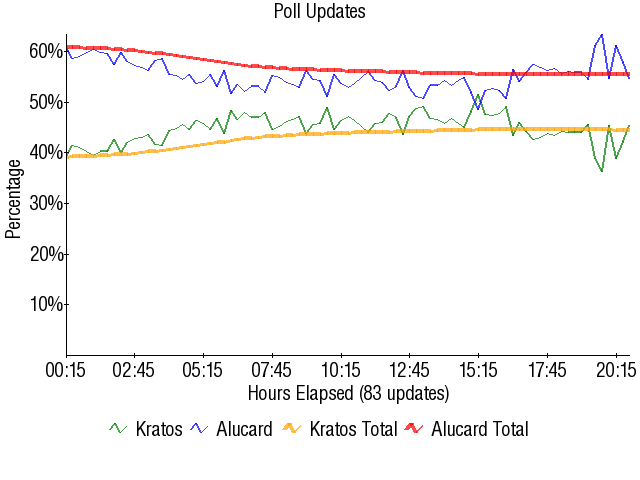 Retrieved from "https://board8.fandom.com/wiki/(3)Kratos_vs_(6)Alucard_2005?oldid=56037"
Community content is available under CC-BY-SA unless otherwise noted.