When the bracket was first released, this match looked to be a candidate for the lowest vote total of the contest, simply because both characters are little more than characterless boss fights. Mother Brain is little more than the final boss at the end of a couple of Metroid games, and while Lavos has a little more going for him in the way of being prominent in his own game, he too is little more than the boss at the end of Chrono Trigger. This was a match that few would care about, though it was a fairly obvious match in that it would likely come down to franchise voting. Chrono Trigger is far more popular than any Metroid title here on GameFAQs, so when you have a character from each game that few care about, picking the one associated with Chrono Trigger is probably the way to go.

The match played out as expected, save for Mother Brain doing a lot better than many expected she would. This didn't matter much in the long run, given that the entire board expected Lavos to win this match before jobbing to Liquid Snake in round two, though it did add to a lot of building theories about this contest. Despite the fact that Chrono Trigger would likely wipe any Metroid game off of any poll, Mother Brain did a lot better than most people thought. Remember, Mother Brain is hardly anything more than a faceless final boss fight in three Metroid games. For her to almost get 45% of the vote against a clearly stronger Lavos is an impressive feat given the circumstances, unless you believe that Captain N truly did make that much of a difference.

The true meaning behind this match was to preview the looming Diablo/Ridley affair, and if Mother Brain could do this well against Lavos, one would have to assume that Ridley was in pretty good shape. After all, there was no way that Mother Brain could be stronger than Ridley, right? >_>

Overall, it was a fairly boring match with hardly anything to talk about throughout save for the somewhat surprising closeness of it all, though everyone got a nice laugh when the stats were released after this match. CJayC, our famous leader, lost his perfect bracket to Mother Brain and did not appear on the leaderboard for the rest of the contest. 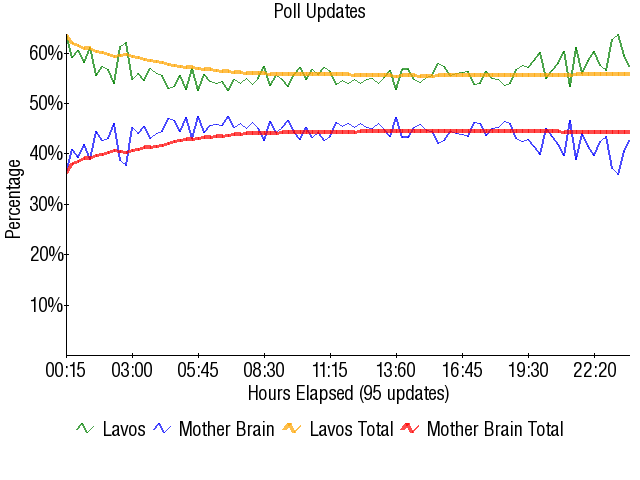 Retrieved from "https://board8.fandom.com/wiki/(3)Lavos_vs_(6)Mother_Brain_2005?oldid=55953"
Community content is available under CC-BY-SA unless otherwise noted.