Before this contest began, Magus/Knuckes was in no discussion. All of the debates were whether or not Squall would be able to rSFF Magus, and even those who argued in favor of Squall having the advantage over Magus due to Magus possibly being overrated in the stats didn't figure that Knuckles would actually be able to threaten in this match. No one in the BOP, no Oracle, and no Guru picked Knuckles to win this. The only person I even remember giving Knuckles a chance was HaRRicH, and he wasn't even taking his Knuckles > Magus stuff seriously.

Magus was expected to win this match with ease. He was supposed to be able to take down Knuckles with around 60% of the vote en route to winning the division that was seemingly designed for him to waltz through. The man beat Ganon, who had just broken 40% on Sephiroth not too long ago. The man almost broke 35% on Link, which very few characters have the ability to do.

That giant thud you hear is arguably the single most overrated fraud we've ever had in one of these contests falling flat on his ass. In the span of 24 hours, Magus went from being compared with the likes of Sonic and being handed an entire division to being compared with the likes of Liquid Snake, Tidus, Frog, and leaving everyone questioning just how badly Magus has been overrated until this past contest.

Everything started off well enough, with Magus pulling in well over 60% of the vote as expected. But within seconds, something seemed amiss. Magus started losing some steam, and even though was still increasing his lead by quite a lot, those with Magus > Squall in their brackets began to concede that Magus likely had no chance to win his next match. Magus needed to score near 60% to prove that he was able to take down Squall, but in the second 5 minute update, Magus's percentage dropped from over 58% to just under 56.5%. If Magus was unable to score ~60% on Knuckles during his strongest part of every match, the odds of him beating Squall were practically zero.

But within a few minutes, the absolute unthinkable began to occur. Not only was Magus proving himself unable of taking down Squall, but he was showing signs that he may not even be able to take down Knuckles. Magus's lead was not increasing at a uniform rate, and he had to rely on wild spikes in his vote intake just to increase his lead early on in this match. Knuckles was stalling Magus every now and then, and Magus would counter with very odd vote spikes. This pattern continued for quite some time, and murmurs began of how Knuckles may actually be able to put his historic day vote capabilities to good use and actually win the match. Remember, Knuckles was slated to lose this match in a blowout.

Barely an hour and a half had passed in the poll, and Magus's momentum.... completely stopped. Knuckles was able to stall Magus from gaining any more big increases, and though Magus was able to slowly get his lead up to 650, the realization of what was soon to occur began to set in. Not only did Magus have no chance at all of taking down Squall or winning the division, not only did Knuckles prove that he had a chance to win the match, but it was very possible that Knuckles would be able to use his traditionally insane day vote to absolutely flatten Magus into the ground and win the match by several thousand votes.

Knuckles shocked the world not far after Magus's increase was stalled, and Knuckles soon began to slowly chip away at Magus's lead just a couple of hours into the match. It took seemingly forever or Knuckles to gain any large updates, but Knux was able to chip away piece by piece at the lead that Magus built early on. It took seemingly forever for Knuckles to get the lead just from 650 to 400, but it didn't take much longer for the vaunted Knuckles day vote to take effect. However, around six hours into the poll, after Magus's flat-out pathetic vote intake all but cost him the match before three hours of the match were over, the vaunted Knuckles day vote began to take full swing at the overrated Prince of Zeal. Votes began pouring in for Knuckles, and what was once a mighty struggle turned into child's play for Knux.

Once Knuckles caught his day vote, he was able to use it to absolutely flatten Magus and bury him into the ground well past having any actual shot at winning the match. At 9:00 AM EST, Knuckles was trailing by just over 300 votes and was struggling to pick votes away from Magus's lead. Less than nine hours later, Knuckles was ahead by over 2700 votes.

The funniest thing about this match is that despite Magus catching the evening vote and taking off almost 1000 votes (rambling of a possible Magus comeback appeared every time Magus went over the necessary tie quota, but Knuckles was easily able to hold him off) from Knuckles's peak of 2700, Magus would still go down as arguably the biggest choke in the history of these contests. Even ytmnds were spawned from this match, with maguslosttoknuckles.ytmnd.com being the funniest.

And it's true. In 2003, Magus was an overrated newcomer who managed to use his fresh status and existing strength to overperform in two straight matches. In 2004, we all assumed that Magus was SFFd to hell and back by Crono and simply plugged his 2003 value into the final Xsts. But in 2005, after two full years of many people saying how overrated Magus was, the true colors finally came out. Magus was an overrated fraud, and even though Leonhart had it pegged almost perfectly, not even he mentioned that Knuckles could perhaps win the match... "because of how... out of whack it seemed at the time".

In terms of true shock value, this match was the best of the contest by far. Even today, many people still say that this match made the contest interesting, all while Board 8 has put Magus as its favorite character in two straight mass votings. One could argue for Ocelot/Pac Man or Ness/CJ or even something else, but the Knuckles upset was such that a whole lot of people cared a great deal about both characters. None of the other upsets through the contest felt like they had the same luster to them as this one did. Matches like this are what keep us interested in these polls.

Anyone can look at Magus and say that he was overrated, but how in the world could he have been overrated by this much? You don't just randomly score 35% on Link by accident, and even though CT characters tend to overperform when given sprites, that's still a rather large discrepancy. I'm getting the feeling that perhaps Magus got extremely lucky against Ganondorf and overperformed to hell against both Ganon and Link. But even then, overperforming this much?

Know what's even funnier? Due to bracket voters perhaps pushing Magus rather hard to try and save the match for him, he may also be overrated in these stats as well. Characters that lose close matches have a tendency to do very badly in their next contest.

In conclusion, Magus = an overrated bust. He's still my favorite character, but I can't exactly deny that he was overhyped and overblown to extreme levels. One need only look at Magus's bio on MMX and I's site for proof. And yes, I'll update that one accordingly later.

Cue the Knuckles > Squall bandwagon spearheaded by people who refused to believe that Magus wasn't an overrated bust. 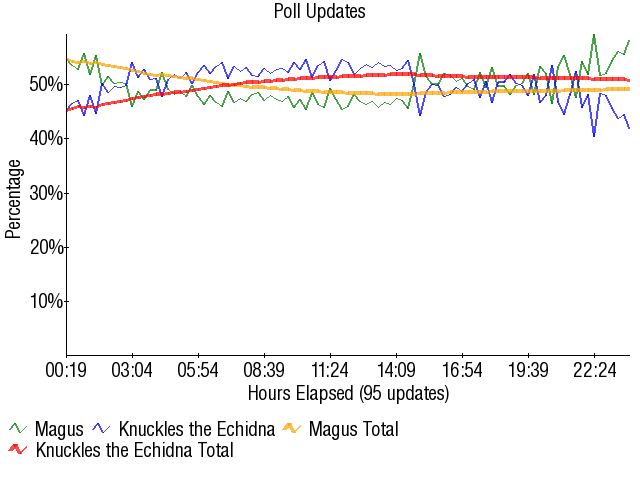 If you want examples of the board getting completely and utterly blindsided by a result, look no further than this, the textbook example of Board 8 falling flat on its collective face. No Guru, no BOP bracket, no Oracle called this match correctly. Such floppage hadn’t been seen since a certain green plumber fell flat on his face in 2003. But Magus managed to do the unthinkable and lose to Knuckles in Round One, despite the fact that, two years prior, he’d brooked an incredible 35% on Link.

So what happened? Were the signs always there and we just missed them? Whatever you think, it doesn’t change the outcome of this match: Magus led for a little bit before Knuckles just surged ahead and won decisively in one of the biggest upsets on the board in contest history. People (myself included) had Magus taking the entire division, and a ton of brackets went up in smoke almost at once. No character has seen such a fall from grace as poor Magus has.

Retrieved from "https://board8.fandom.com/wiki/(3)Magus_vs_(6)Knuckles_the_Echidna_2005?oldid=56068"
Community content is available under CC-BY-SA unless otherwise noted.