Is it possible to have a bigger fall from grace than Crash Bandicoot? Here we have a guy who has gone from being a 2 seed in 2002 to being not just fodder in 2004, but fodder to an Xbox character. Master Chief's stock in this contest has a very bright future, but seeing anything remotely related to the Xbox score 70% in any poll whatsoever on this site means that the loser of such a poll, Crash Bandicoot in this case, needs to get out of the contest and make way for someone more deserving. No one cares about 3D platformer characters anymore, and it showed in this match. Some people might not like Master Chief, but it seems that no one likes Crash Bandicoot anymore. Easiest analysis ever =)

There was one interesting note to be drawn from this poll. While Frog was busy having the fight of his life against Liquid Snake, Master Chief was on cruise control here against Crash. Whether or not this meant the end of Xbox hate was yet to be determined, as was whether Halo's success had anything to do with Master Chief doing so well, but one thing we know for sure is that the Frog/Master Chief match looked mighty interesting after this day was done. 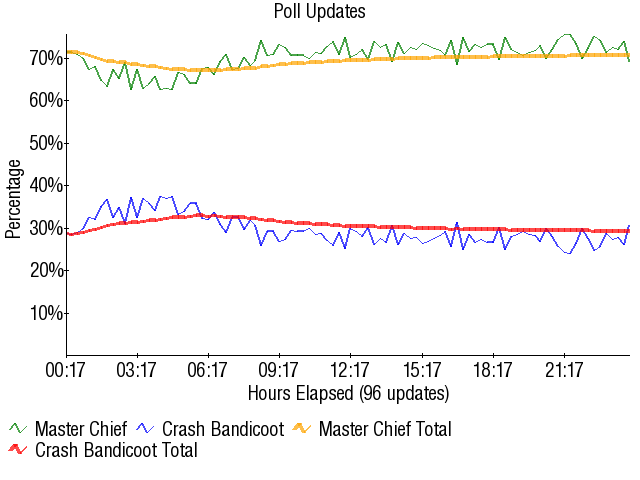 Retrieved from "https://board8.fandom.com/wiki/(3)Master_Chief_vs_(14)Crash_Bandicoot_2004?oldid=64110"
Community content is available under CC-BY-SA unless otherwise noted.