This was one of the most debated matches of round 1 pre-contest, and it was given a little extra oomph with Tidus losing to Sub-Zero in the match preceding it. It was possible we'd have a 24 hour period with father and son losing back to back.

The reason this was so debated is because one, the match was very important -- in all likelihood it was a 3 point match because the winner was a near-lock to defeat Ratchet. Two, Jecht was a true untested wild card with strength presumably in Phoenix's range. Untested characters are very fun in today's era of stats and trend knowledge, because it's a good shot in the arm. The only debate here was whether or not you felt Jecht had the strength to beat Phoenix. That's it. Or maybe a better way to say it would be which among these two characters was weaker, because presumably neither of these two would light the world on fire.

Phoenix is by far Board 8's favorite character, so every year he'll get nominated a lot and get good seeds. Whether he does anything with them or not is a different story, and you can make a case he's still a cult character. We all love him, but look at his contest history. This guy broke GFNW in 2006, needed massive rallying to hold off Bomberman in 2007, got extremely lucky with his first fourpack in 2008, and his game got totally worked over in 2009. If you set Jecht equal to Tidus, you get statistical values well above these performances (and frankly, Jecht is more popular than Tidus; that is a 1v1 match we need to see one day, and it could happen given Bacon's love of SFF). Even Sin's warped villain's contest value is better than most of this stuff.

People knew all this. The main argument in Phoenix's favor was seeding (and thus, bracket votes) and it being a night match. Phoenix has pure joke trends and gets a lot of rallying, so the thought was he could hold off Jecht for 12 hours if he built a good lead early. When the poll began, it was clear Phoenix was done. He wasn't able to stay above even 52% after 5 minutes had passed, which is a death sentence against Square at night. Phoenix held on for a few more updates before completely collapsing, and Jecht pulled in around 55% of the vote overnight to seal the deal. It wasn't all that unexpected a result, but it was pretty disappointing to see Phoenix drop the ball so much in a winnable match. His biggest lead was 87 in a winnable match; he's done much better in matches where he had no chance at all. For Jecht, he proved he was legit and essentially earned a bye into the third round.

Fun Fact: We lost the last perfect during Phoenix vs Jecht, which was none other than Dr_Football Factor'D himself. 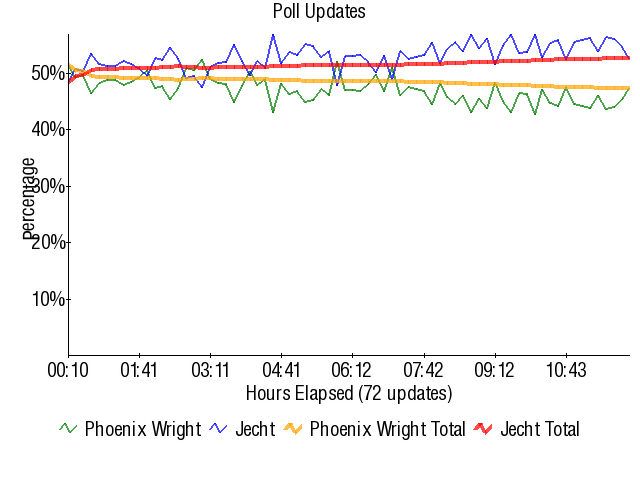 • Previous Match       • Next Match
Retrieved from "https://board8.fandom.com/wiki/(3)Phoenix_Wright_vs_(14)Jecht_2010?oldid=59174"
Community content is available under CC-BY-SA unless otherwise noted.