Truth be told, and I say this as a Mega Man fan, Zero has been the only Mega Man character worth watching in any contest since 2002. Mega Man took us for an amazing ride in 2002, but ever since then, only Zero has been able to exit these contests with any sort of dignity. In 2003, after Mega Man walked through the weakest division of the contest, he got blasted to hell and back by a steroid-induced Sephiroth after giving him the fight of his life just one year prior. Mega Man/Sephiroth 2003 got over 25,000 more votes than Mega Man/Sephiroth 2002, yet Mega Man only managed to enjoy 28 of those votes. Zero's killing of Scorpion and subsequent close loss to Sonic arguably made more noise.

It got even worse in Spring 2004. Of the top ten characters in the 2003 Xsts, only Mega Man failed to get a game into the Spring 2004 Contest. Then in the Summer 2004 Contest, Mega Man walked through yet another easy division before getting absolutely killed by Link in the Final Four. Zero's 10000 vote loss to Mega Man was arguably more impressive than any of Mega Man's wins, which is pretty damned sad. Mega Man had essentially bombed three contests in a row, and now, with a chance for the series to redeem itself in the Spring 2005 contest, Mega Man had bombed to hell once again.

It was bad enough when Sigma decided to struggle with Andross before completely bombing against Bowser, but hardly anyone expected Sigma to come out of his fourpack. Wily, however, was quite clearly expected to come out of his fourpack after a quick glimpse at the prediction percentages. Yet Wily, like every other Mega Man character sans Zero since 2003, completely bombed. Ocelot took a fast lead in the match, and though his percentage followed the exact same pattern seen in his match against Nemesis, Wily was never in the match at all. Ocelot put him away early, and for the majority of the match, few people were talking about how strong Ocelot was, but that fact that Wily was virtually equal to Nemesis in strength. No one at all expected this to happen before the contest, and though Wily lost in a respectable manner, the fact is that he had every sign pointing in his favor and still lost the match with ease. There is a slight possibility that Ocelot's MGS match picture helped him out a little, but not to the point of winning this match with such ease. Wily crapped out in this match, and there's little else to say. It was yet another hyped Spring 2005 match that ended in a dud due to one of the characters not bothering to show up, and next up for Ocelot was Bowser. There was a slight possibility that Ocelot had a chance in this match if he were at all stronger than Liquid Snake, though the chances of it actually happening were slim to none. Bowser meant business in this contest. 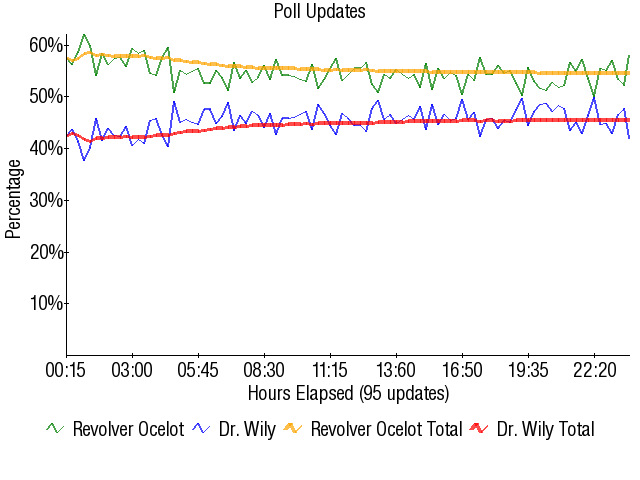 Retrieved from "https://board8.fandom.com/wiki/(3)Revolver_Ocelot_vs_(2)Dr._Wily_2005?oldid=55977"
Community content is available under CC-BY-SA unless otherwise noted.