The very day after Sigma completely craps out against Andross, we see another match that puts a heavy board favorite into question. In Slowflake's Board Odds Project, absolutely no one picked Nemesis to win this match. It was foregone conclusion to most people that Ocelot would not only beat Nemesis, but steamroll over the winner of Wily/Ultros as well. A few people even believed that Ocelot could give Bowser himself a run for his money. After all, everyone remembers how well Liquid performed in the Summer 2004 Contest, and if Ocelot is at all comparable to Liquid, he should be able to win his fourpack (possibly even his division) with ease.

When the match began, everything was going perfectly for Ocelot. He had 70% of the vote early on, and though Nemesis quickly managed to bring this down to 65%, one could easily blame early percentage fluctuations for this due to a small voter pool. However, Ocelot gave his supporters much cause for concern as the board vote began to wear off, because his percentage continued to drop. It was similar to Sigma's struggle in that Ocelot was never in any real danger of actually losing the match, but Ocelot's failure to completely obliterate someone that he should have easily destroyed brought up a massive amount of questions about not only him, but everyone surrounding the two characters in the match.

One, there was the whole Nemesis/Wesker debate. Every Resident Evil fan who was watching Ocelot's match unfold absolutely refused to believe that Nemesis could be stronger than Wesker, and gave multiple proofs of this from the Resident Evil plot itself. Essentially, a lot of people were trying to prove that Wesker was going to take down Kefka in a match that was hotly debated from day one. After all, if Nemesis was strong, Wesker had to be stronger.

Two, there was the Ocelot/Wily debates that started ravaging the board almost from the second that Ocelot began to have problems in the match. Everywhere you looked, you saw a topic made from an Ocelot supporter wishing that they had picked Wily to win the fourpack instead of Ocelot, because even the Ocelot supporters refused to believe that Nemesis was stronger than Wesker, nor did they believe that Dr. Wily was at all weak. These debates would rage on for quite a long time, and they set the stats topic on fire as a result. Everywhere you looked, the faith in Revolver Ocelot was dying all due to this one match, and even the people who still had faith in Ocelot winning his match with Wily believed that the situation looked grim. Regardless, everyone on both sides believed that Ocelot/Wily would be a barnburner, and were absolutely shocked with Ocelot's weakness/Nemesis's strength in this match.

Knowing what we know now, is it at all possible that this match was hit with what we're now calling "The Spring 2005 voting trend" (ie, a voting pattern that makes absolutely no sense when compared to any other contest)? Or maybe it's the fact that there is a Resident Evil entitled Resident Evil 3: Nemesis. Or maybe, just maybe, the massive overlap among the MGS/RE fanbases allowed Nemesis to give Ocelot a large shot of Reverse SFF. After all, if you look at the boss fights involving these two characters, there is little debate as to which character gives the more difficult fight. Gamers typically remember that sort of thing above most others when discussing villains, though it probably made little difference. All we know for a fact is that Ocelot was clearly at a disadvantage going into the next round. He had to hope and pray that Wily was weak as hell, which is a bad thing to hope for when trying to win a tough match. It's much better to believe in your own strength rather than another's weakness in a fight. 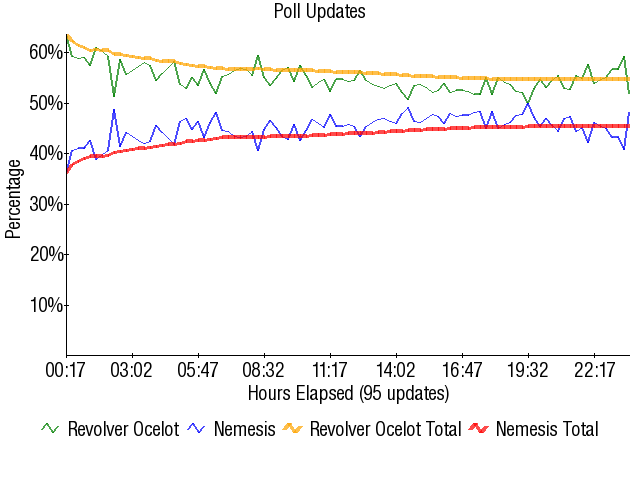 Retrieved from "https://board8.fandom.com/wiki/(3)Revolver_Ocelot_vs_(6)Nemesis_2005?oldid=55944"
Community content is available under CC-BY-SA unless otherwise noted.