Following up the legendary Missingno > Crono match is an impossible task, but Chrono Trigger wasn't the only game that looked like crap this contest. The whole Call of Duty crew looked HORRIBLE this contest, and all three were overseeded beyond belief. The kingpin for that point is Soap himself, who rode Modern Warfare 2's release all the way up to a 3 seed. Entirely because of his seeding, this was somewhat of a debated match but was still a "Who cares?" above all else.

The gurus and even the casuals were not fooled, however. Big Daddy was the slight favorite from both demographics, if only because he did well in his vote-in despite Andrew Ryan sharing the poll as an albatross. That plus no one plays Call of Duty for the characters. A lot of people only get it for the multiplayer and couldn't care less what the story is about.

But even with all that, Soap totally embarrassed himself and his series here. Letting Big Daddy 62-38 you as a 3 seed is a joke, and it makes Soap the worst 3 seed ever. At least Gordon Freeman managed 40% on Tina Armstrong in 2002. Ness > Big Daddy was the guru consensus in round 2, but this match threw a wrench into that theory. At the very least, Big Daddy proved to have some strength. Given how weak Ness is, "some" strength is all you need to beat him. 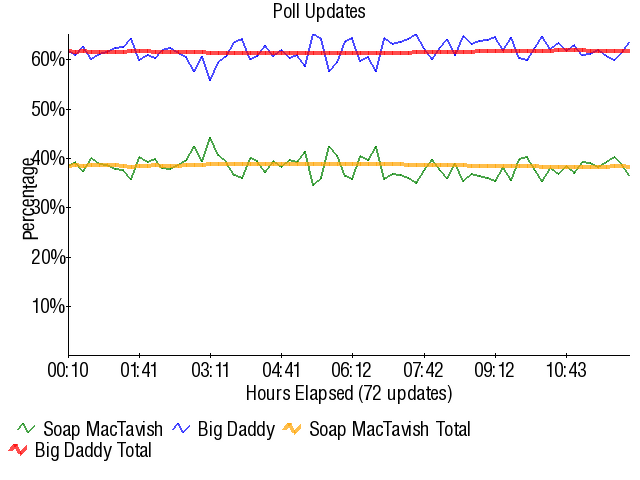 • Previous Match       • Next Match
Retrieved from "https://board8.fandom.com/wiki/(3)Soap_MacTavish_vs_(14)Big_Daddy_2010?oldid=59198"
Community content is available under CC-BY-SA unless otherwise noted.