Though SSB winning its first two matches was the big conclusion across Board 8 (SSBM is the board's favorite game, which is all you need to know about why SSB was favored by so much), one look at the prediction percentage would yield that the casual pick likely went with Sonic here. And given what this contest had shown us to this point, a Sonic > SSB upset in the bracket wasn't too bad an upset special. In theory.

All the new or small series in this contest were tanking. All the established, OLD-SKOOL series with a lot of history and exposure across a billion consoles were doing better than expected, including the series that we all thought would do well. Seriously, 100,000 votes being broken individually multiple times?

Added to this was the fact that SSBM wasn't all that impressive in the games contest, and this match was essentially SSBM versus the entire Sonic series. It only beat MGS2 by 10000 votes, Vice City by 5000 and FFX by ~1500 before Starcraft got caught cheating against it. From there, it was 37% against FF7. Far better than most other games could hope to get, but still not overly impressive. All it really did was avoid a doubling at the hands of what may no longer be this site's strongest force.

There was one fact, however, that clearly favored SSB in the match:

The Brawl E3 trailer fell between those two polls, and red13n was seriously like the only person to notice. Regardless of how good Sonic looked going into this, the other small slash new series that tanked weren't Nintendo-based. And it showed come match time.

You know the rules. Any debated match that ends with a margin larger than 55-45 is an absolute and utter destruction by my standards. Sonic once again played the part of the goat in a winnable big match, which once again robbed us of seeing a Mario/Sonic clash. We were closer this year than any other of finally seeing those two go at it; Sonic winning this would have literally meant Mario v Sonic the following round.

But as it stood, Smash put a choke hold on Sonic that it would simply not relinquish from start to finish. The percentages barely moved in the match save for Sonic's day vote chipping away before Smash brought it back up again during the afternoon and night, but it was meaningless. The percentages you see above are essentially the essence of what this match was from start to finish -- the prototypical debated-match turned-killing-by-debated match-standards kind of blowout. Not too large on paper, but given what Sonic had going for it going in, this was nothing short of yet another disappointment for Sonic. And he has a long line of them in these contests. Only Knuckles has really done much, in retrospect.

Some argued that this match was our last chance to see something great. It would obviously end differently, but conjecture at the time wasn't too far off. 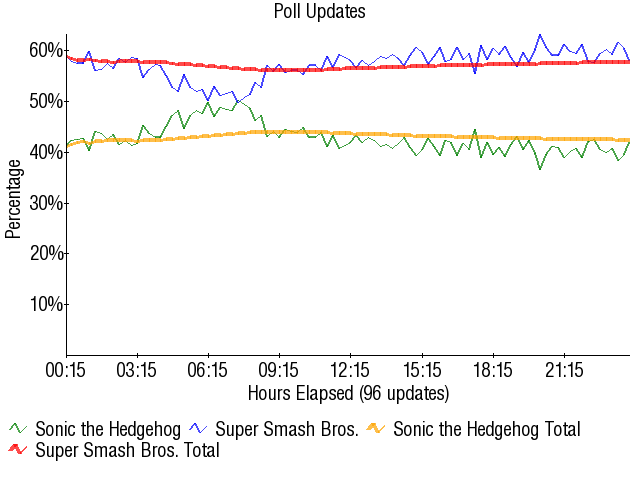