Remember all the Vincent hype leading up to his match with Dante and how overrated Vincent turned out to be? Not that he wasn't a strong character, but some people felt that Vincent was a threat to beat Crono after his match with Kerrigan. Dante would eventually expose him as not being quite that tough.

Tifa/Luigi was more of the same, except that this time around, people had a character who had been in a contest before (Vyse) to base their overestimations off of. And because of this, those who supported that Luigi would expose Tifa were not quite as plentiful as those who said the same for Dante. In fact, the only truly vocal advocant I saw for Luigi underestimation was RPGuy, who actually bet his account that Luigi would break 45% in the match. No one took the bet. Which I find to be surprising, because if the X-Stats were as valid as everyone assumes, Tifa breaking 55% on Uigi should have been a lock. She almost performed as well on Vyse as Cloud did!1!1

When the match first began, Luigi found himself able to hang with Tifa for awhile. It didn't take long for Tifa to do him in and essentially seal the match, but she wasn't able to completely kill him like many expected her to. She managed to go over 57% for a brief time in those first two hours (which is seemingly Tifa's strongest time for some odd reason; the other FF7 characters are weak at the start and kill during the day), but before long Luigi was able to cut into her percentage at a consistent rate. He didn't make any real push at winning other than a minor scare in which he brought Tifa's lead down from 2175 to 2110 early in the morning, but Luigi's spending the rest of the match getting Tifa down to nearly 52.5% (after Tifa was well over 57% early on) before Tifa was able to get over 53% against with the second night vote helped confirm two things.

One, and I'm stealing a quote from Lopen here, Board 8 (and especially the stats topic) is filled with Xst and FF7 marks that overestimate characters to hell and back based on one match all the time. They also have a wonderful habit of projecting (and changing projections) based off of the first two seconds of every match.

Two, for whatever reason Vyse bombed so badly that the sky was the only thing he saw come the end of his match against Tifa. One could call RPG SFF in that match, but it's a shady theory at best. Though if I ever get around to making my own set of stats, I may slap an SFF adjustment on Vyse and give him his 2004 value just to see what happens.

Much like Dante, Luigi may have lost the match, but the moral victory goes entirely to him. 60% was the sexy value for Tifa on this match, given that most people expected her to perform better than Squall did in 2003. Either Tifa bombed (which is somewhat difficult for an FF7 character to do), or Luigi boosted. Given how well Nintendo was performing in this contest, people saw this match as more proof of The Boost™. 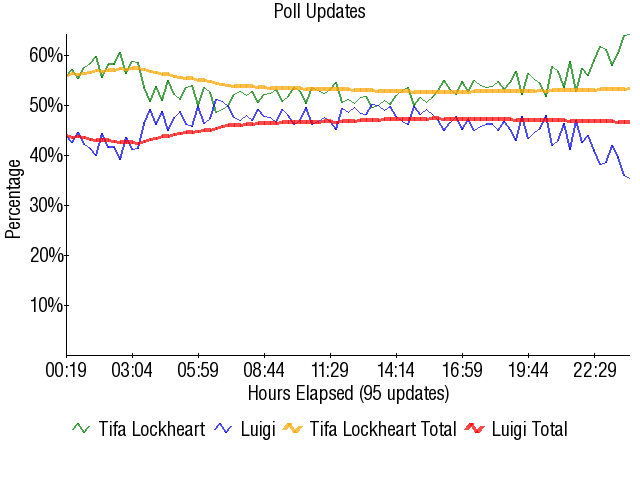 Retrieved from "https://board8.fandom.com/wiki/(3)Tifa_Lockheart_vs_(2)Luigi_2005?oldid=56114"
Community content is available under CC-BY-SA unless otherwise noted.