After three contests in which Tifa was cast aside due to company limits or people nominating other Square characters, she was finally given a chance to perform. And hot damn, did she enter this contest with a bang.

The big debate involving Tifa wasn't whether or not she would do well, but it was practically a lock for her to take her fourpack before jobbing to Sonic in the divisional finals. It was where she stood within the Aeris/Tifa/Vincent triangle. Hardly anyone could agree on where to place these three, and unfortunately, Aeris was not in this contest to give us a decent comparison. Essentially, we would wind up comparing the three by comparing 2003 Aeris to how well Tifa and Vincent did in this contest.

In Vincent's first match, he performed above and beyond expectations and flat-out killed Kerrigan. However, Vyse was not Kerrigan. Vyse has been in these contests before and had actually won a match in the past. We had a fairly decent number on Vyse, and determined Vyse to be the fodder line in these contests. Most people assumed that he was consistent enough.

But like Vincent before her, Tifa came out and flat-out destroyed her first round opponent to go well above and beyond expectations. Blowing out Kerrigan is one thing, but blowing out Vyse is something else entirely. Within 5 minutes of this poll's existence, Tifa was over 77% and climbing. It looked for a few minutes as if Tifa would blow past Vyse en route to a victory well into the 80% range, but she calmed down a little and finished the match with just over 78% of the vote. But even then, what Tifa managed to do here was still impressive.

Vyse only managed to score 18.59% on Cloud. He only did 3% better against Tifa, so either Tifa was far stronger than most people expected and was on track to beat Sonic and Mega Man en route to the Final Four, or Vyse was much weaker than everyone assumed and was simply long overdue to reveal his true colors. And man, did the people who assumed a constant Vyse cause a few silly debates in the days following this match or what?

Lopen made a very good post in the stats topic recently, and it applies to Vyse possibly being overestimated. He more or less said that the only reason Vyse looked so good against Laharl is because both characters were cult favorites. Vyse had been in a contest previously, and was the top option. This makes enough sense, because when you stick two unknowns together, the human mind tends to favor the first choice. Laharl probably wouldn't have won if the seeding in that match were reversed, but he may have performed better.

Besides, Vyse's victory may have been a case of the percentages not being as big an indicator as the vote totals. Skies didn't sell all too well, and when Vyse goes up against someone of the calibur as Tifa, you're asking a very large percentage of a relatively small fanbase to be there. Vyse/Laharl was far and away the lowest vote draw of Summer 2004, and when you add in an extra 30000 votes, Vyse not being able to keep up with what his Xst value projected may not have been as big a surprise.

And yes, I'm aware that his value was based off the loss against Cloud. But Vyse doing badly because of an increase in vote totals isn't too far out of the question, and even Vyse/Cloud barely managed 91000 votes. If Lloyd can possibly bomb because of high vote totals, why can't Vyse?

Unless you actually wanted to think that Tifa was going to somehow make the Final Four based off of this match, that is. Regardless, why Vyse bombed here is an interesting little issue. 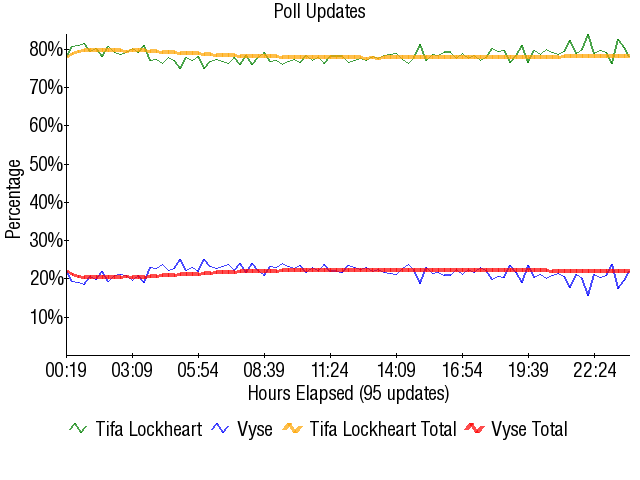 Retrieved from "https://board8.fandom.com/wiki/(3)Tifa_Lockheart_vs_(6)Vyse_2005?oldid=56076"
Community content is available under CC-BY-SA unless otherwise noted.