The result of the match between Zero and Lloyd was never in question mind you, as the fate of both characters was already predetermined at the release of the bracket with Lloyd beating Wesker before bowing out to Zero, and Zero destined to easily dispatch Ryu Hayabusa and Lloyd Irving before losing to Mario. The match was more about answering questions.

Zero had to answer questions about his strength, as he was in 2k4’s controversial 20XX division and many people questioned whether he, along with the rest of his division, should have been adjusted due to Mega Man’s flopping against Link. Many people suggested that the adjustment shouldn’t have been made due to many members of the division not doing as well as they should have this year. Liquid Snake bombed in the Spring Contest against Sephiroth, and Master Chief and Frog both didn’t live up to expectations in their first round matchups. However, Knuckles was able to take down Magus, and Mega Man was able to exceed his projections against Conker, even with Conker having a new release. As for Zero, he seemed to slightly underperform against Ryu Hayabusa, but Ryu also was able to get his more recognizable ninja form as opposed to his Dead or Alive character model.

As for Lloyd, he also had to answer questions about his strength. After Wesker’s bombing to Kefka in the Spring Contest, he was made to look weaker than Mithos. Mithos was actually projected to get 58.87% on Wesker. So when Lloyd’s match came along and he only managed to get 54.69% on Wesker, people sounded the alarm. How can Lloyd, the protagonist of Tales of Symphonia, be weaker than his obscure villain counterpart? Most people pegged it on Wesker doing worse on Kefka due to Kefka getting his angel sprite, or the converse of Mithos overperforming on Kefka due to Kefka getting his ugly clown FMV picture.

Still, when the day of the match came, Lloyd supporters were optimistic about Lloyd being able to break 35% on Zero. Using the 2k4 stats, Mithos was projected to get 24.38% on Zero, so that was the number Lloyd had to shoot for to rank higher than Mithos. In a boring match, Lloyd was able to get 26.75% on Zero. Lloyd was able to rank higher than Mithos, although it wasn’t by much. Other than a Mithos overperformance on Kefka, one conclusion that was drawn was that since Tales of Symphonia isn’t a widely known game, its fanbase equally supports all of its characters. Nonetheless, Lloyd proved that he didn’t pose much of a threat in a contest setting, as Zero decimated him. He played his role by beating Wesker before bowing out to Zero. The only question left was to see how Zero would fare in his upcoming match with Mario. 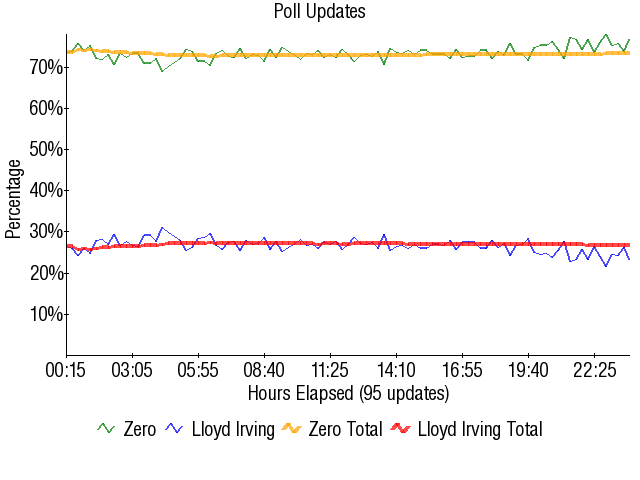 Retrieved from "https://board8.fandom.com/wiki/(3)Zero_vs_(2)Lloyd_Irving_2005?oldid=56090"
Community content is available under CC-BY-SA unless otherwise noted.