After Ness/CJ got the board into a giant tizzy fit, it was nice to see a predictable, boring match come along to calm everyone down. Zero winning was a foregone conclusion despite Ryu's amazing win against Jill Valentine last year, and mostly everyone knew it.

Except for the casuals, anyway. What in the world do Mega Man characters need to do to get some respect from the bracketmakers in these things? Mega Man and crew are almost always underestimated, regardless of opponent. It's not like Mega Man X isn't the most popular Mega Man series on GameFAQs or anything.... http://www.gamefaqs.com/poll/index.html?poll=1834

Anyway, while Zero began this match on fire, some would argue that he eventually wound up underperforming in the match. The SFF adjusted 2004 Xsts have Ryu scoring 32.6% on Zero, and as you can see, he scored a very even 37% on him after Zero began the match by whipping Ryu's ass all over the place. There are a couple of arguments to present as the reason behind Ryu doing a tad better than people expected him to. The most popular reason is that Ryu underperformed against Sora last year due to having a horrific picture against him, while Ryu was given his Xbox Ninja Gaiden box art pic against Zero. The other popular reason is that Zero overperformed on Mega Man in 2004 by a percent or two due to rSFF and was a bit overrated in the stats. I don't know how valid that one is, but the MMX series being more popular than the original keeps it within reason.

Of course, most of this barely matters given that Zero arguably had the easiest path to call in the entire contest. He was a lock to win his fourpack, and was a lock to lose to Mario in the divisional finals. That's all there is to it, though the bad part is that for the second year in a row, there would be no real way to tell where Zero stands. It's not like 2004 20XX is worth looking at for reliable stats these days, anyway. 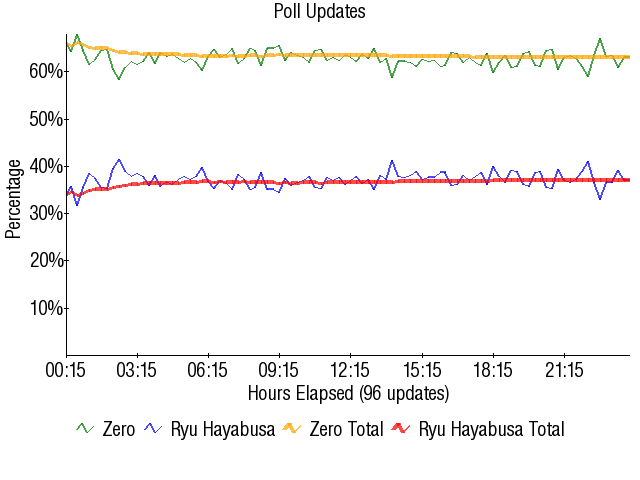 Retrieved from "https://board8.fandom.com/wiki/(3)Zero_vs_(6)Ryu_Hayabusa_2005?oldid=56020"
Community content is available under CC-BY-SA unless otherwise noted.