Every contest has some random first round match that gets stupidly fun for no real reason. This contest's version of that was Wesker vs Ken. Everyone with stats knowledge picked Ken to win this, because Wesker is the guy who got 30% on Kefka and lost to Lloyd Irving. Who really cares about RE5 when you're already so far behind? Besides, Ken was loooooooong overdue to finally get a 1v1 win. There's a reason he smashed the Returner's Tournament this year. Granted he got stuck with a 13 seed, but still. Street Fighta 4 son. Well-known character in any circle. And he's against the-guy-that-let-Kefka-break-70%-on-him.

So of course the match starts dead even with Board 8's Ken supporters fighting for their brackets for an hour, then Wesker finally takes control and inches out to a lead of 210. It was one of those close matches where any update gain over 10 was accused of cheating (Side Note: We need 15 minute updates back in the worst way), but the reality is this was just a close, fun match.

When Ken started coming back with the ASV, things just got out of control all over the place. Everyone figured Ken would come back with the ASV (especially the insane California ASV, which matters a lot because all the fighting tournaments take place out there and the state's population is massive), but that didn't stop people from having a ball and plastering the entire board with quotes and YouTube videos. It's rare you see a cool match like this between such quotable entities, so people took full advantage. We must have filled 3 full stats topics that day with nothing but IN-DES-TRUC-TI-BLE, YOU CAN'T HIDE FOREVER and CHRIIIIIIIIIIIIIIIIIIIIS!!!!!!!

Not to mention these two vids:


As for how the match ended, Ken did come back with the early ASV. But rather than taking the lead with momentum, Wesker shook him off and got the lead back up to 180 in all of 15 minutes. The match then stalled for a few hours, but the California ASV showed up for mopup duty before long. Ken was losing by 200 at 6, and spent the next three hours coming back for good with a Cali-fueled beach bum rage. Ken passed Wesker at 9, then more or less dominated the final three hours. It was a somewhat bad ending to a great match, because Ken ended up having a lead bigger than 460 and failed to break Frog's wire-to-wire record. But that didn't take away from how fun this all was. It's extremely rare you see a close match where everyone has a good time, doesn't really care who wins and was just happy to be there on the boards with other fun people. If only they were all like this. 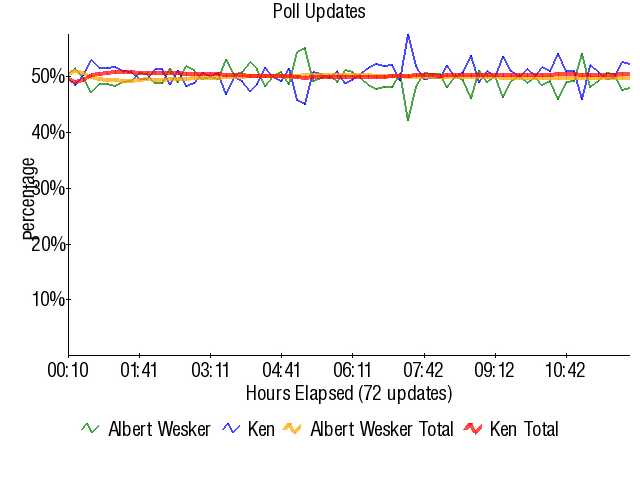 • Previous Match       • Next Match
Retrieved from "https://board8.fandom.com/wiki/(4)Albert_Wesker_vs_(13)Ken_Masters_2010?oldid=71256"
Community content is available under CC-BY-SA unless otherwise noted.