"People need to get over the psychological barrier that CATS can't win a match." -creativename

"I can't believe we're going to lose a perfect bracket to CATS." -Ngamer64

Coming into this match, the standard CATS discussion was taking place. Most people on the board planned on voting and rooting for CATS, but next to no one actually believed that CATS could actually win a match. He had had three matches prior to this, and in all of them, he was flat-out killed. Some people have been led to believe that there is a ceiling for the number of votes that CATS could receive in a match.

If this match proved anything, it's that nearly any character can do damage given the right opponent. Even CATS. Ansem may be from the 4 million+ sales phenomenon known as Kingdom Hearts, but he is not prominent in the game. Until the tail end of the game when he reveals himself, the only thing you know about Ansem is that he was doing some research on the Heartless and left behind some of his work for you to read. Essentially, the only thing Ansem is is the final boss fight of the game, and he has little to no story leading up to the fight with him at all. It was somewhat expected that Ansem may struggle in the match, but even the most devout follower of CATStholocism believed deep down that even if CATS were to grab a lead early on in the match, he would likely screw up later on.

And as is in accordance with the prophecy, CATS managed to grab the early lead against Ansem. But when the seconds turned into minutes, then the minutes into lead increases, the board began to experience an explosion. This was not some mere fluke. CATS truly was building a lead on the heavily-favored Ansem in the match. Ansem tried his damndest to follow in the footsteps of all of CATS's other opponents to quickly grab the lead after falling behind early against CATS, but he was unable to do so. Every time Ansem tried to gain his footing, CATS..... CATS... managed to kick him back down en route to holding the lead in the match for its first hour.

By this point, the board went in an absolute tizzy. Everyone expected CATS to perform somewhat well given that this may very well be the easiest match he'll ever have, but hardly anyone expected him to hold and build a lead in the match. And it would only get even better for the CATS faithful.

Throughout CATS's entire miracle push, a ton of people expected CATS to die off the map at any second. It never happened. Ansem eventually managed to recover and slowly cut into CATS's slim lead, but not before CATS was the first of the two characters to 1000 votes. Ansem managed to eventually recover and take the lead from CATS, but not before CATS held the lead for the first two hours of the poll. Ansem tried to shake off CATS on his own, but CATS was able to hang tough and stay dead even in the match.

For all of Ansem's efforts to take control of the match for good, CATS refused to stay more than one step behind him. Every time Ansem tried to pull away, CATS fought back. It got so bad for Ansem that he needed to rely on the morning vote to save him from CATS!

CATS stayed dead even with Ansem for the first five hours of the poll and well over 10,000 votes, and it took over six hours for Ansem to finally catch the momentum of the morning vote to put CATS away for good. This is the same CATS whom no one believes can actually win a match. Even now, with preliminary Xsts being put out almost by the hour, everyone refuses to take CATS's positioning seriously. Ansem eventually went on to win the match, but no one will ever remember this match for Ansem's historic flop; this entire match was all about a character whose fanbase almost entirely consists of people who have never played or seen his game.

So how could something like this have possibly happened? For starters, in every match CATS is in, CATS is the beneficiary of the board vote more than any other character in these polls. Board 8 loves the little guy, and no matter who he's going up against, you'd be hard-pressed to find people voting against him. There's also the aforementioned fact that Ansem is not the least bit prominent in his game. He suffers from the "I'm just the guy you fight at the end of the game and I'm here for little to no reason" disease. Lastly, CATS is strong enough to win a match or do damage given the right opponent; he isn't Tanner, and nearly everyone on the board was unaware of how large an impact their "joke votes" would have when added to the strength that he already possesses. Go back and read the quote from creativename, because it's true. CATS is not a complete contest joke like many would believe, and he has no vote ceiling. If you put a weak character in front of CATS, he won't roll over and die. CATS is not an auto-loss when in a bracket, and despite the fact that no one takes him seriously, he's going to shock the world and win a match in one of these things sooner or later. Oh, and there's also the fact that CATS got the pic of him that everyone knows rather than the eggplant mug that he's been stuck with three years in a row. That likely made a huge difference.

I have one final point to make, and then I'm moving on to the next match.

CATS, everyone’s favorite perennial joke character, was put in probably the easiest match of his entire contest career, and the amazing thing is that he almost won it. CATS led Ansem for damn near the entire morning before the Kingdom Hearts day vote swept the villain to victory. This wasn’t just a board vote giving CATS the edge in the first five minutes or so (as normally happens) – this was CATS actually having a prayer at looking semi-respectable. Heck, in the X-stats for his division, CATS got ranked third, above even Robotnik!

Sadly, CATS has never been put in such a winnable situation again, even in 2007, when he couldn’t even muster up enough strength to get past Peach and Meta Knight. But for one brief, glorious morning… it almost happened. 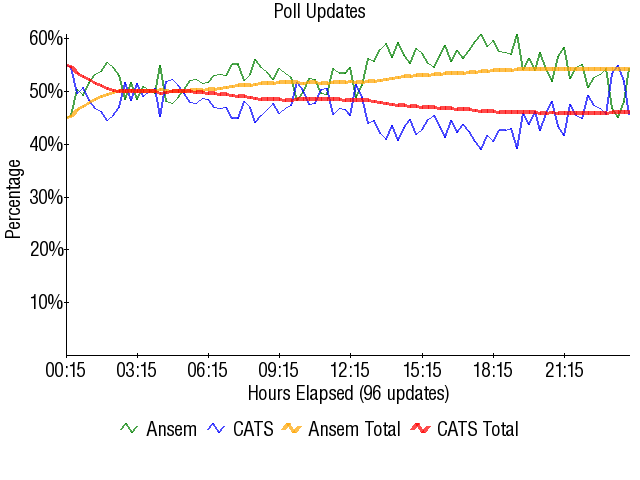 Retrieved from "https://board8.fandom.com/wiki/(4)Ansem_vs_(5)CATS_2005?oldid=73544"
Community content is available under CC-BY-SA unless otherwise noted.