This was more or less the highlight of the entire contest, not to mention its most important and hyped match. From the moment Missingno crushed its vote-in poll, people pointed to it as the next potential L-Block and got the bandwagon going. Then the bracket came out, and it got the worst possible draw ever: Crono, a Noble Niner in the first round. Even *if* Missingno got past Crono, he'd have Yoshi next, then Sephiroth in a night match. Had Missingno managed to get through all that, he probably would have won the entire contest. RockMFR actually banked on this and picked Missingno to win in his guru. Other people were equally intelligent about their Missingno picks. Palmer predicted Missingno's path perfectly -- that is, he picked Missingno to beat Crono and Yoshi, then lose to Sephiroth. Only 7.08% of people picked this path correctly, and of those lucky few won the contest because of this upset parlayed with Charizard winning the Heart division and Snake > Sephiroth.

But before all that, Missingno had to actually beat Crono. Even with Crono being the weakest member of the Noble Nine right now and getting stuck in a day match against a Pokemon, this was a very tall order. Even those few who picked Missingno knew it was a longshot at best, but no matter what this was bound to be a great match. The pre-match hype was completely ridiculous, and the arguing was hilarious.

Oh man, the arguing. Ever since L-Block in 2007, there's been this huge groundswell of anti-joke vs pro-joke people. Both can be really annoying, and Missingno was unfortunately the big target of the backlash this year. It started when he crushed the vote-in, and you can imagine how bad it got once he started winning. There's nothing wrong with being anti-joke and wanting the polls to have as much credibility as possible (whatever this even means these days; for the record, the VERY FIRST MATCH EVER had a joke character in it so arguing "contest credibility" is moronic), but there is something wrong being unreasonably obnoxious about it. We get it. You don't think inanimate objects, jokes and glitches should get in because joke strength isn't legitimate strength for whatever reason. Basically, you have sand on your crotch and forgot how to have fun a long time ago. Stop ruining it for everyone else.

As for the actual match, it was worthy of all the hype. There were 1175 votes in the first 5 minutes, and Crono led by a single vote after that first five minutes. It would be the only update all match where Crono led. After that update, Missingno went on a bandwagon-fueled steroid rampage. Within 2 hours, he had a 600 vote lead and the match more or less seemed over. The Pokemon ASV hadn't yet shown up -- even though the match was on a Sunday and the "ASV" was diluted, characters with good ASVs always trend up during the late afternoon for awhile. But in standard Crono fashion, he did the exact opposite of what we all expected and actually started coming back during the Pokemon ASV.

But every time Crono made any headway at all, Missingno would slap it back down in a couple updates with the power of bandwagoned rallying. People were ready for this match for weeks in advance, and the match being on a Sunday was great news for the rallyers. The match continued like this for hours, with Crono making some gains and Missingno slapping them all away, until the evening. Around 7 EST or so, Crono finally started a comeback attempt that would stick. He was down 600 votes (and had been down by that much for about half the match), but finally started doing some damage. Over the next two hours, he made massive cuts on the lead and got it all the way down below 200. Missingno slapped that away and got it back up to 270 pretty quickly, but then Crono started coming back yet again afterwards and got the lead all the way down to 115.

For the second time, the match seemed over. Crono's second night vote was about to start, and with his newfound momentum it looked like he would put away the glitch for good. But you don't mess with joke character bandwagon rallies. NO ONE, not even Crono with the SNV or Mario with "The Clutch", could beat a bandwagon rallied joke character in a close match. Missingno not only took Crono's SNV from him, but he did so without any mercy or pause. For the last couple hours of the poll, Missingno pulled in updates in the 53-55% range and removed all doubt from this match.

People of course wanted Bacon to check for vote-stuffing in such a high-scoring close match involving a rallied joke, so extended the poll for 30 minutes due to technical difficulties.

The match ended at midnight as planned, and Missingno was declared the legitimate winner. He made another topic explaining all the attempted cheating ("attempted" being the key word here, since cheating is almost impossible on this site now) and where it came from. Crono fans attempted to cheat twice as much as Missingno fans, and Missingno won every single significant voting block: registered users, unregistered users, you name it. It was a legit, rallied win for Missingno. More importantly, it signified the end of the Noble Nine's 1v1 streak. In 1v1s, the Noble Nine was 124-0 against outsiders. Thanks to Missingno's upset, that streak finally ended. The only thing the NN has left where it's undefeated is 24-hour 1v1s, but they might never come back for a full contest. 12-hour polls are too fun.

The aftermath was of course nuts with cheating accusations, people complaining how Missingno would become L-Block and all the rest. And for whatever reason, the resident Board 8 trolls (the number of which is unfortunately very high) latched onto anti-Noble Nine sentiment as their latest topic of interest. In every topic about the Noble Nine, the same 10 idiots would derail and talk about how the NN doesn't exist, how new characters should be added, how old-timers who invented the concept had no right to define it and whatever other dumb nonsense these people came up with.

I didn't save the topic I made that day, but it went something like this:

Title: "As someone who actually helped define the Noble Nine, be quiet."

"There's a massive amount of misinformation getting thrown around about the Noble Nine, so allow me to set the record straight for the ignorant.

-'Noble Nine' was a term coined by Slowflake in the stats topic in 2003 as extrapolated standings became popular. We all liked Slow, so we all ended up using the term and it stuck. It was catchy, and more importantly it was accurate. We in the stats topic then helped flesh and define things.
-The Noble Nine are nine characters who have made every main character contest since 2002, who until today did not lose to outside competition. Those characters are Link, Cloud, Sephiroth, Mario, Samus, Mega Man, Solid Snake, Sonic the Hedgehog and Crono. The only character even up for debate here is Squall, but his loss to Vincent 1v1 puts that argument to rest.
-Addendum to the "made every contest since 2002" point. There is no adding or removing anyone. Crono losing doesn't mean anything. You don't get to remove him, then add Missingno, Luigi, Bowser, Tifa, L-Block, Vincent or whoever else. It doesn't work that way.
-Crono losing doesn't change who the Noble Nine is. There is no Super Seven, Terrific Ten or whatever else. The Noble Nine is still the same nine characters, they just don't have their winning streak anymore. That's it. It's not brain surgery.
-Actually yes, those who were around to define the term get to make the rules. Thanks for asking. Random trolls whining in every topic is wholly irrelevant to the process. This was all decided SEVEN YEARS AGO. You're free to make whatever term you want, but it won't become contest nomenclature. All three B8 wiki admins, including myself, agree with my recount of events, have no issue deleting all the alternate pages people are making out of spite and have no issue with me banning you from making edits. If you think you'll get people to call it the Terrific Ten, best of luck to you.


Stop whining. This is how it always will be: http://board8.wikia.com/wiki/Noble_Nine"

The topic was stickied by Math Murderer within 5 minutes, so one could say even the GameFAQs staff agrees with the term's definition.

The aftermath of this match died out over time once people remembered how the ignore button works (it's not like any of the anti-NN crybabies are worth listening to, anyway), and common sense and rationality won the day yet again. As a total side note, the Noble Nine page on the wiki became the most visited page after this match. I didn't know the term was so widespread, and there were a TON of topics from people no one had seen before talking about it. Very interesting stuff.

As for the more relevant aftermath, Missingno parlayed this win into a very fun contest run, and might have won the thing outright with better bracket placement. Crono, then Yoshi, then Night Sephiroth was just impossible to get through. Crono however cemented Chrono Trigger's collapse. All three Crono Trigger characters lost in the first round of this contest, which is something that cannot be said of any other game from any other Noble Niner regarding any other contest. CT has fallen off the rails in recent years, and it's only going to get worse. Magus's collapse is well-known, Crono is hopping into that "don't ever trust me" boat along with him, and Frog has been slipping off the map rather subtly. This speaks nothing of CT getting punked by Mario 64 twice in the 2009 games contest.

All in all, match of the year. Easily.

Crono encountered 'M, tried fighting it and lost all his save data. Better luck next year.

Other Board 8 Reaction[edit | edit source]

Crono lost in a very close match that went back and forth all day long. this was one of the highest voted matches of 2010, and due to missingno's impressive performance in the rest of the contest, Despite his round 1 loss Crono would end up looking better than most of his noble nine companions, being projected to get close to 47% against fellow Square powerhouse Sephiroth.

Due to the Nature of this match, which did not run througout the whole day, many people question the validity of the "breaking" of the noble nine, as it also looked evident that Crono would have won in a standard 24 hour poll. 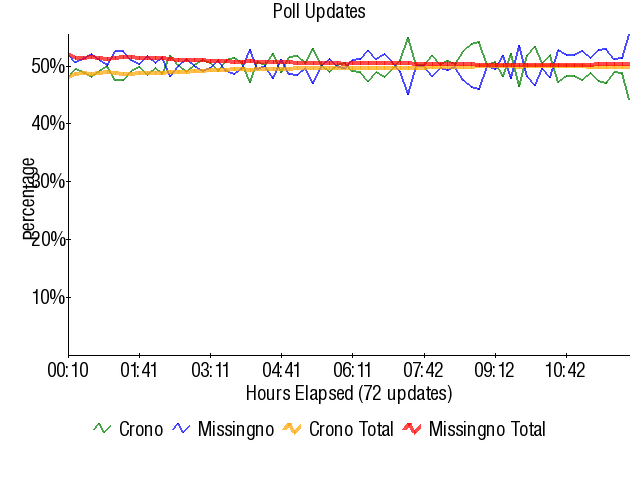