Something about Dante just bores the hell out of me in these contests. In 2002, he expectedly defeated Q*bert, but even in a debated match against Crono, the actual match was very ho-hum as if his path was directly laid out before him from the start. In 2003, it was more of the same. Everyone knew that Dante would take down Ryo Hazuki, and then in the second round, he faced Ryu in a debated match. He wound up losing that match, but once again, Dante went down in ho-hum fashion with very little outcry from those who picked him to win.

In 2004, we see the exact same thing. Dante is yet again a 4 seed, and yet again, he gets a very ho-hum four pack. Dante, Ratchet, Viewtiful Joe, and Tails aren't exactly the most exciting characters to watch in a contest setting, no matter how their matches all go. The only difference this year was that Dante was virtually guaranteed a spot in the Sweet 16 right from the start. He did his part by blowing out Ratchet with 80% of the vote, and even though the illusion of Dante actually being strong was created after this match, this turned out to be false. Ratchet, like every other 3D platformer in this contest, flat-out bombed this year. Simple as that. When you can let Dante get 80% of the vote, you know that you've got some problems.

We need to see Dante involved in a decent match, because he has been a bore to watch in action for three years now. The biggest thing to note about him is that he is the only character to get the same seed every year. And when something that minor is the most notable thing about you, you need to do something to draw some excitement to yourself. He may have it coming on the way however, as Capcom is promising that Devil May Cry 3 will put DMC on the map as one of the elite series in all of gaming. Dante also has the benefit of his series having one of the highest sales per release ratios of any gaming series of all time, which could explain why Dante performs on a decent level every year. 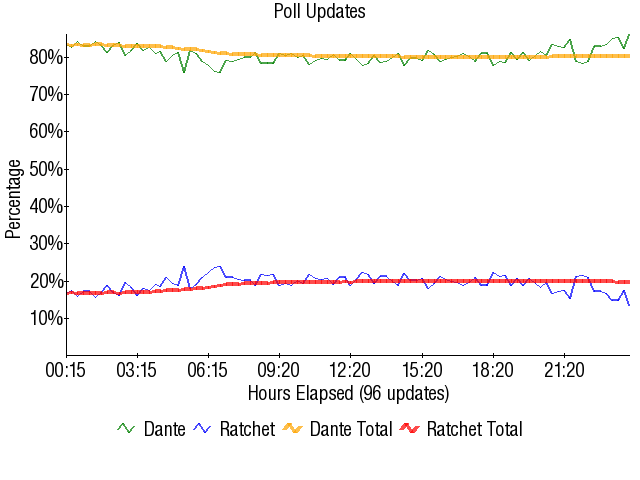 Retrieved from "https://board8.fandom.com/wiki/(4)Dante_vs_(13)Ratchet_2004?oldid=55840"
Community content is available under CC-BY-SA unless otherwise noted.