Zidane went out and bombed against Claptrap, so all Ike really had to do here was smash Prinny to quell all upset hype. Or better yet, all he had to do was pick the Prinny up and throw it somewhere. Boom. Instant death, dood.

Instead, he goes "Yeah you suck Zidane, I can bomb WORSE". Verily, it came to pass. Yes this was a 62-38 blowout over the guru winner, but this was still one of the most embarrassing performances ever. The final percentage doesn't even tell the story here, because until Ike's monster day vote showed up Prinny was seriously threatening to keep him at or under 60%. Ike saved some dignity by ASVing it up, but not all of it.

There is no excuse here at all. This is Ike, in a day match. This is what he was *supposed* to do: http://www.gamefaqscontests.com/images/poll_graph.php?matchnum=2893&type=2&seconds=60&max=0

Match pic, weird momentum, AntiBlowoutFAQs, whatever. There's no excuse here, and Ike is massively lucky his round 2 match against Zidane was a day match. 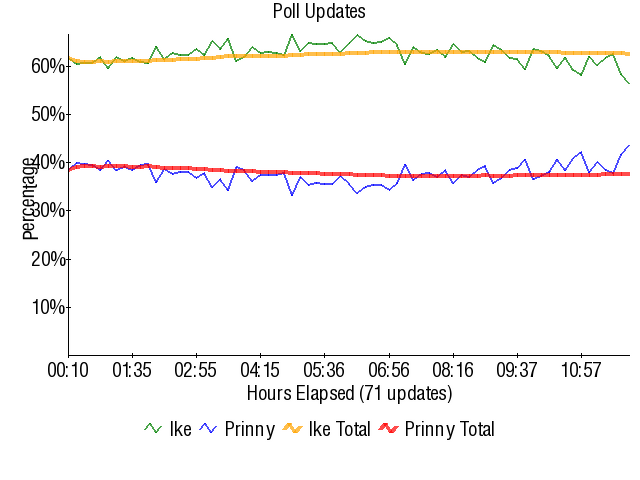