The very day after Kefka opens the door for plenty of other people in the Ruin Division to take a stab at winning it, we got to see whether or not the Wesker faithful knew what they were talking about. 2004 stats project Kefka to score over 70% on Luca Blight, and though those stats aren't always accurate, it's a safe assumption that Wesker blowing out Luca Blight would mean bad news for Kefka regardless of the hard numbers surrounding the match.

So what does Wesker do? He comes out and absolutely bombs. Screw scoring 70% on Luca Blight, because after the first few seconds of the poll, Wesker found his percentage hovering well under 60%. At one point, Wesker's percentage fell under 56%. Wesker managed to recover a little with the day vote, but every time it looked as if Wesker was going to make a huge push to get his percentage climbing, Luca Blight was there to smack him back down to earth. Wesker was able to break 60% for a short while after putting up a massive fight to do so, but Luca Blight made sure that it didn't last until the end of the poll. Wesker won the match, but the fact that he needed to score 70% in the match and wound up failing to even break 60% was the dominant story of the match. Wesker went from being a possible threat to Kefka to being one of the laughingstocks of the contest in the span of 24 hours. Kefka may have looked like crap in his first round match against Mithos, but it was clear that he had a bye straight to the divisional finals after this joke of a performance by his supposed second round threat.

I've done some research on Luca Blight's character, and from the looks of it, he's pretty damned awesome. However, his game only selling 92,000 copies makes it impossible for him to be little more than a contest joke, and Luca Blight was the latest cult RPG character to drop out of this contest in the very first round. However, his performance opened the door for a few other characters. No longer was Kefka in any danger of losing his second round match, and more importantly, the Ocelot supporters arguing that Wesker could very well be much weaker than Nemesis were no longer as insane as they first looked. Wesker completely crapped out in this match, and this made HoratioQHornblower look like more of a genius than nearly everyone else.

"Every time someone mentions that Wesker was in Resident Evil 4, someone always asks 'Really?!' within three posts. Wesker isn't going to beat Kefka, and you're a fool if you think otherwise." 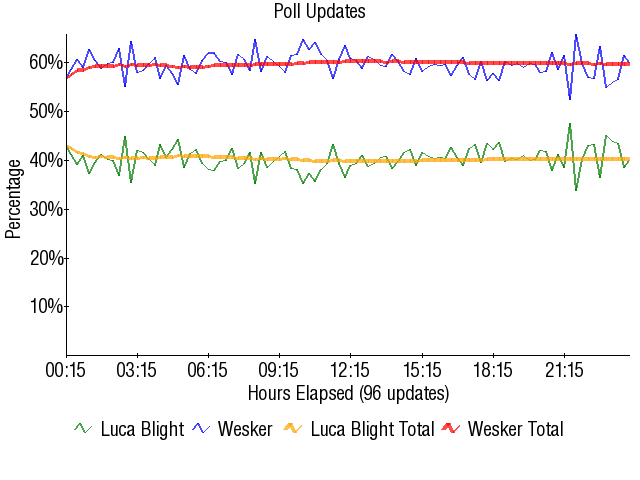 Retrieved from "https://board8.fandom.com/wiki/(4)Luca_Blight_vs_(5)Albert_Wesker_2005?oldid=55960"
Community content is available under CC-BY-SA unless otherwise noted.