I'm really confused as to why there was such a surprise during the actual match between Luigi and Pac Man. Pac Man did around what he was expected to do based on the '03 stats. If you ask me, the match was about as ho-hum as a match could get; the only thing to be drawn from this match would be that Luigi technically underperformed, and given that his hyped second round match with Yoshi was right around the corner, any weakness in the armor could have been disastrous for him. I maintained that Luigi was the underdog in that match from the start, and when you factor in the results of his match with Pac Man here, the imminent Yoshi/Luigi result wasn't all that hard to see coming, despite the fact that the board was split virtually down the middle on that match.

I almost have to tip my hat to Pac Man here. He has fallen off dramatically since his days of being a 1 seed in 2002, but so long as he is still here, he is still going to put up decent numbers against good characters. He isn't elite by any means, but he is surely not 13 seed material either. That said, getting doubled up by Luigi is not good, considering how badly Luigi's stock will suffer by the time all is said and done. Pac Man may be respected by most gamers, bu the fact of the matter remains that he has gone from a 1 seed to a 5 seed to a 9 seed to a 13 seed in four contests. He may be hard-pressed to make the field next year, and after that, he might be gone from the contest forever. He has yet to recover from losing to Scorpion back in 2002, when you think about it. 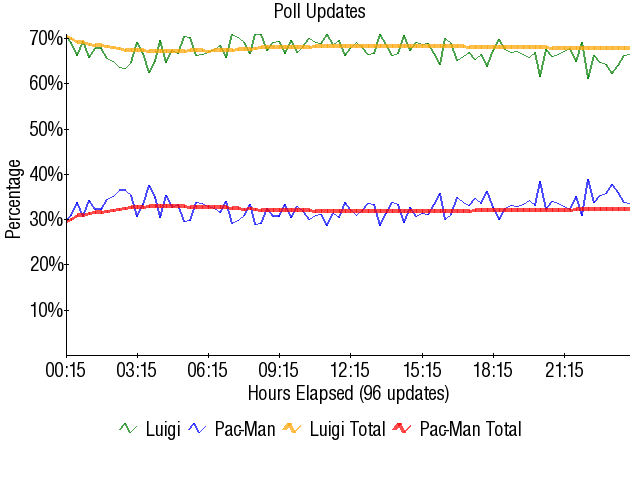 Retrieved from "https://board8.fandom.com/wiki/(4)Luigi_vs_(13)Pac-Man_2004?oldid=55792"
Community content is available under CC-BY-SA unless otherwise noted.