Funny that on the mere second day of the match, a firestorm broke out all across Board 8. Before this match showed up, CJ over Ness was the "obvious" pick. CJ is the lead character of Grand Theft Auto: San Andreas, the same game that won Game of the Year on GameFAQs in 2004. And though people figured that Vercetti would perhaps be stronger than CJ or that perhaps San Andreas would cause both characters to underperform, people figured that CJ would easily take the match regardless. After all, it was the lead of San Andreas, one of the highest-selling games of all time, versus a character who gets almost all of his popularity from a series that has nothing to do with where he originally came from. I speak of Ness getting most of his recognition from SSB/M and not EarthBound, of course. Even Lucid Faia, arguably the board's biggest Ness/EarthBound fan, figured that CJ was a lock to win.

But there was one argument that kept coming from those few people who openly supported Ness winning the match: appeal. CJ doesn't have it, regardless of how popular his game is. And given that people's imaginary Xst values of CJ probably weren't that much higher than Ness's to begin with, Ness had a good chance to win. For what it's worth, Giygas placed ahead of Officer Tenpenny in the Spring 2005 Xsts.

Regardless of this, few people actually thought that Ness could actually win. He hasn't done so hot in past contests, and it took a match against a 3D platformer character (a genre whose characters get NO support in these things) for Ness to finally win one. CJ was the consensus board pick, but oh man, did Ness ever go and **** that one up.

Not only did CJ bomb like all hell in the match, but CJayC forgot to put CJ in the match pic. Seriously, take a good look at the pic. That isn't Carl Johnson. Not that it mattered anyway, because CJ only had the lead for all of three seconds. After that, it was Ness/Jak all over again. Ness was up against a well-known character that was supposed to beat him with ease, yet after barely being challenged, Ness was off to the races en route to absolutely blowing CJ off of the map in the match. And despite a few people calling for the comeback for the first few hours of CJ getting whipped, Ness never bothered letting up in the match. Call this whatever you want, but this was a Grade A ass-kicking in comparison to how easily the board picked CJ in the match. I forgot to save Slow's BOP stats, but I'm sure CJ had.... some insanely overwhelming number of brackets in his favor.

On the surface, one can easily call why this happened. As popular as San Andreas is, the thought of CJ not being as strong as Vercetti wasn't impossible. And if CJ truly did turn out to be weaker than Vercetti, CJ didn't have a whole heck of a lot of breathing room between Vercetti and Ness. He had to be almost even with Vercetti in popularity to beat Ness, and he simply wasn't.

As for WHY CJ isn't as popular as Vercetti, I pose a question instead of trying to answer that one myself.

Is GameFAQs racist, or at the very least, does race play any part in these matches?

It's a difficult thing to talk about in a civil manner, especially given that racism is still very much alive in America. One need only look at what happened in New Orleans to see this, and the very mention of the subject can send sparks flying all over the place.

But despite it being a touchy subject, let's look at the facts. In five character contests (and 291 character slots when you add up all of them), only eight black characters have appeared in these things: Ganondorf, Shadow the Hedgehog, Jak, Officer Tenpenny, Ansem, CJ, Vivi, and Kerrigan. Of those eight, how many would you *truly* consider to be black? Jak, Ansem, Shadow, and Vivi are... a stretch, to say the least.

But does them not being popular as characters despite their game selling over ten million copies truly reflect on the voters? One can easily argue that Grand Theft Auto in general is unfairly discriminated against, as evidenced by Vercetti's lackluster performances in these things. But there is still the issue of Vercetti being stronger than CJ despite San Andreas being more recent and more popular. Does it all really boil down to a simple issue of race and appeal?

It's quite possible that it does, though I'd like to think that race was a minor issue in CJ's match. It could easily explain Vercetti being stronger than CJ, but would CJ have really beaten Ness if he were white? It's tough to say. I can't say for myself with any clarity as to race's effect on the match, but I can say for a fact that blacks simply don't show up in games very often. When they do, they're portrayed as being very stereotypical. You rarely see strong, confident, well-mannered and well-spoken black characters in games. Just look at the cast of San Andreas or Barret from Final Fantasy 7, arguably the most well-known black characters in gaming. And when developers decide to go against this, you can't even tell whether or not they're black in the first place. Just look at Kerrigan, or Ganondorf, or Duran. Maybe I'm not looking in the right places or something, but I've played a LOT of games. I can't name five outright black characters other than the San Andreas crew and Barret.

To me, that's not on gamers, but developers. Gamers are a well-rounded bunch, and I'd like to think that my caste is mature enough that a black character would be every bit as popular (and strong in these polls) as a white character if the two races were given equal exposure. But they aren't. The dominant thing you see in games are white men and white women. The fact that a good majority of the games we play are from Japan certainly doesn't help matters, given their culture.

Would this match have been different if CJ were white? Does gaming reflect the fact that there are still very deep, unsolved black/white issues around the world? Possibly. I don't want to call gaming racist, but look at the facts. Look at the characters in the games you play, then try looking me in the eye and telling me that there isn't tokenism. I dare you. I'm not saying CJ wins if he's white (knowing what we know now, I wouldn't even pick Vercetti over Ness), just that gaming is a reflection of what we as a society, or at least those who design the games we play, think.

Or maybe blacks simply don't play games as often or in as large a number as whites. I'd like to think that it's this factor more than anything else, because it adds a positive spin on the whole issue. But whatever it was that caused CJ to lose, I know two things. One, I was never happier about a loss than I was on that day. EarthBound and Ness are probably > whatever you like. And two, there haven't been too many cases where I was more embarrassed to be a member of Board 8 than I was during this match. This place was absolutely sickening to look at during that match, to the point of me barely wanting to discuss it. As if egos being shattered weren't bad enough due to virtually the entire board losing their perfects on the second day of the contest after cruising through two easy contests prior, the entire board was swamped with race arguments all throughout the match. It's tough to be happy about one of your favorite characters winning a tough match when you're reading "Ness is only winning because CJ is black" every other post. You'd think people would be a bit more mature about it.

However, I do have one good thing to say about my fellow gamers as a whole before moving on to the next match of the analysis, and that is that I stand by my assumption that gamers would accept black characters every bit as much as whites if they would actually show up in games more often. If Barret were ever in one of these contests, I guarantee he would be a strong character. In the end, perhaps it was simply GameFAQs not liking Grand Theft Auto that caused CJ to lose, rather than GameFAQs not liking blacks. At least, that's what I'm hoping for. 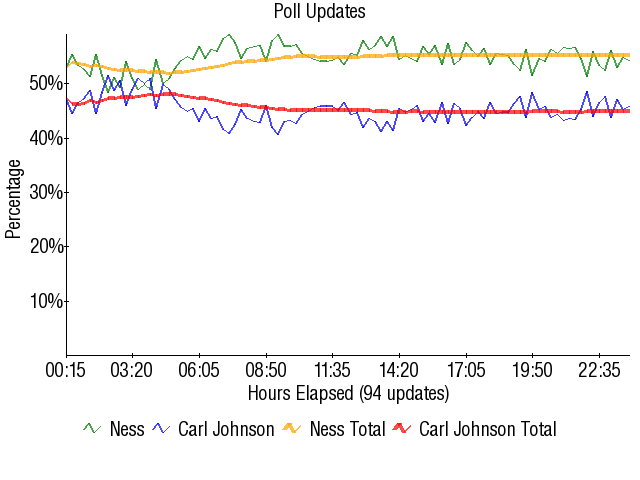 Retrieved from "https://board8.fandom.com/wiki/(4)Ness_vs_(5)Carl_Johnson_2005?oldid=56018"
Community content is available under CC-BY-SA unless otherwise noted.