"How in the hell did Frog do so well last year?"

That was the main warcry all through this match, and for very obvious reasons. If you assume that Frog's 2004 Xst value is on target, then Riku's hypothetical 2004 value becomes 27.95%. This puts him ahead of everyone below Dante and has him scoring 48.3% on Sora.

Yeah, that makes sense. Though if you take a look at the unadjusted stats from this contest, it's hilarious to see how close Sora and Riku wound up being; and it's not like you can adjust for the massive bombing that Sora suffered against Snake in their match. But that's a different conversation for another time.

We all figured that Summer 2004 was a messed up contest statistically and that the 20XX Division in particular was weird, but I doubt most of us expected the characters in there to be THIS overrated. Yes Riku is new, and yes he's probably a little stronger than most of us think he is (Kingdom Hearts has a way of performing like crap based on expectations, but being just fine in the stats later), but it's still hard to imagine Riku being as strong as this match suggests. Remember, Frog is the same character that outlasted Liquid, survived Master Chief's 3000 vote turnaround, and then turned around and broke 48.5% on Solid Snake.

And then he turns around and allows a near doubling to turn into.... that. The match started off just fine for Frog. He was doing exactly what was expected of him, and was well over 70% for the first couple of minutes. His percentage leveled off a little bit afterwards, but he was still alright; Riku was still getting his ass whipped, after all. Even when Frog's percentage began to fall towards 60%, no one was very concerned for him. After all, Riku could have just been overperforming. He is from KH, after all.

But as the match wore on and Frog's percentage began to drop faster than Britney Spears's pants, everyone began to realize that whatever Frog managed to do in 2004 was a complete fluke. And it wasn't like Frog's percentage was falling despite him gaining in votes, either. Riku grew stronger as the match progressed, and despite Frog eventually winning by 3150 votes, Riku won several updates -- some saw Riku take in over 55% of the votes! Against Frog, the same guy who made Solid Snake, a perennial powerhouse, look like an absolute fool.

To put this in a different perspective, everyone is aware that Frog is usually very good with the second night vote. But in the final twelve hours of Frog's match with Riku, he gained a grand total of 400 votes. 400 votes. This is the same guy who erased a 600 vote defecit against Master Chief in mere hours. The same guy who stole 400 votes from Solid Snake. Yet in the final six hours against Riku, Frog did absolutely nothing but prove how unbelievably overrated he was. In 24 hours, Frog went from being a possible contender to one of the biggest frauds we'd ever seen in one of these contests, but to Frog's credit, Riku was a new character. There was a very slight possibility that Riku's strength was legitimate; of course, if you only look at the final six hours of all of Frog's matches, Riku is stronger than Liquid Snake, Master Chief, and Solid Snake.

Hell, he was even stronger than Frog at some points. You don't win updates by occasionally taking in more than 55% of the vote by accident. And while this didn't have a particularly large effect on Frog given that he was guaranteed to lose to Samus anyway, it meant a couple of other things down the line.

One, Sora/Alucard was barely debatable after this match. There was a decent case for Alucard once upon a time, but after seeing what Riku did?

Secondly, Frog's pending bombing was disappointing for CT fans -- more embarrassing than FEMA, if you will -- but this was absolutely nothing compared to what we would see from CT's end later on in this contest. 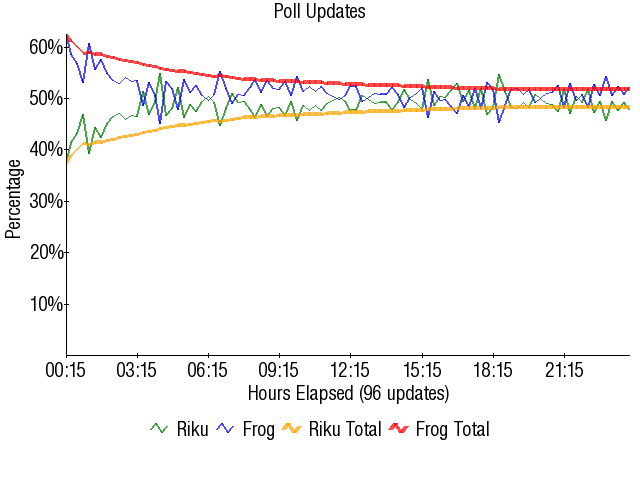 Retrieved from "https://board8.fandom.com/wiki/(4)Riku_vs_(5)Frog_2005?oldid=56027"
Community content is available under CC-BY-SA unless otherwise noted.