Every contest sees its fair share of obvious matches that get debated to hell and back for absolutely no reason, and Kerrigan/Vincent was arguably the best microcosm of such useless debates in the Summer 2005 Contest. In one corner, we had Vincent, arguably one of the biggest snubs in these contests. People have been calling for his appearence for years, and for good reason. Vincent is the fan favorite of Final Fantasy 7, so much so that when Cloud did a cameo in Kingdom Hearts, his design was practically stolen from Vincent. It wasn't a stretch to assume that Vincent could be as strong or stronger than Aeris in these contests, or at the very worst just a tad weaker.

In the other corner, there was Kerrigan. Kerrigan was literally a board creation, thanks to how well she did in Leonhart's contest. People assumed that because Starcraft did so well in Spring 2004, that Starcraft would be able to have a strong character in these contests. The general consensus for that character was Kerrigan, given that she's the most popular character in the game.

But... beating Vincent? Kerrigan was another character that was overhyped and overblown beyond belief, and most people had the "I can't underestimate Blizzard again" mentality going into this match. But there's one problem with that.

Just for kicks, slap Diablo's Spring 2005 number into the 2003 stats. He scores 38.16% against Aeris, which seemed to be a good pre-contest estimation for around where Vincent should place. We'll even give Kerrigan the benefit of the doubt, assume that Vincent is weaker than Aeris and say that Vincent only scores 60% on Diablo.

This means that for Kerrigan to have a shot at Vincent, she'd have to be able to break 60% on Diablo and thus be around the level of characters like Squall, Aeris, and Bowser. Personally, I say to screw thinking such things and that Kerrigan wouldn't even be able to defeat Diablo in one of these contests. Diablo's series has more sales than Starcraft, Diablo 2 is more popular in America than Starcraft, and Diablo just happens to have the same name as his game does. Before this contest, I guaranteed that Diablo would finish higher in the stats than Kerrigan and that Kerrigan would disappoint due to suffering from... well, Terra Disease. Being in a popular game is one thing, but being in an ensemble cast does not. And in Kerrigan's case, I'd go far enough to say that she's not even the main character of the game until the last campaign in Brood War. But that's a different debate for another time.

So if Kerrigan is unable to take on Diablo (and she isn't), how was she supposed to touch Vincent?

Cue the tape for the beginning of the match, in which Vincent not only beats Kerrigan, but absolutely flattens Kerrigan. The match was never close, and the odd thing is that Kerrigan being just over 27.5% at the start was as good as she was going to look for the rest of the match. It began ugly for Kerrigan, and it would only get worse. By the time Vincent was done beating the hell out of Kerrigan, he came damn close to breaking 80%.

Eighty. Percent. In a match that some people were afraid of, for whatever far-off reasons that they came up with in advance. To get an idea of just how bad this was for Kerrigan, the average Oracle pick was Vincent with a mere 59.82%. Kerrigan bombed to hell, and there's really no other way to put it. Vincent just killed her.

And before someone goes and blames the picture for Kerrigan doing so badly, run the same match with the fabled Brood War loading screen pic that was supposed to save her ass. Are Starcraft's fans, the same fans that would vote anything Starcraft over anything else and the same fans that everyone was so scared of ahead of time, so fickle that they would cease to vote for Kerrigan just because she had a bad match pic, so blind that they wouldn't read the name "Kerrigan" as one of the poll options and remember who she is? Please.

Final Fantasy 7 is the mascot of GameFAQs. Tifa's Orthopedic Underwear could have probably won this match in Vincent's place, and it'll be interesting to see if Kerrigan is overestimated to the same levels next year. Assuming she even makes it in after this embarrassment. 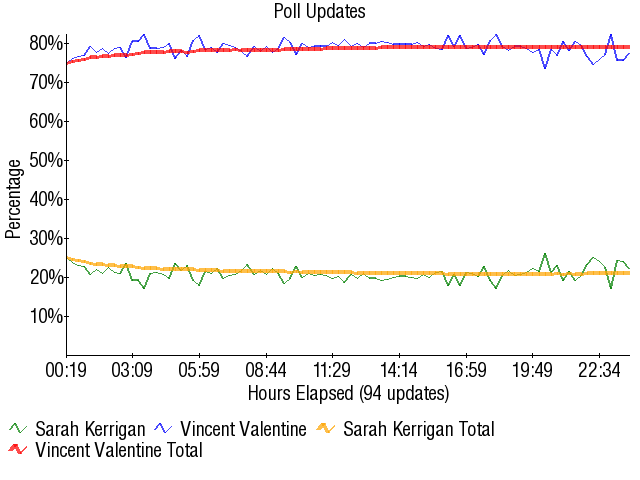 • Previous Match       • Next Match
Retrieved from "https://board8.fandom.com/wiki/(4)Sarah_Kerrigan_vs_(5)Vincent_Valentine_2005?oldid=56066"
Community content is available under CC-BY-SA unless otherwise noted.