Bowser/Pyramid Head may have gotten us going, but this match was the first truly interesting match of the contest. Before reading anything else, take a quick look at Zero's past performances. In 2003, he killed Scorpion and made a close game of his match against Sonic. In fact, Zero's match against Sonic in 2003 marked the end of the perfect brackets. In 2004, Zero was given a seed proper to his strength and flourished. He destroyed Protoman, took out Tommy Vercetti with little trouble, and would wind up giving Mega Man himself a damned good fight before going down. Zero may have only scored 44% in the match, but he only lost by 10000 votes and won multiple updates throughout the day. This is practically unheard of in a late-round SFF match in which one of the competitors barely had any bracket support behind them.

Secondly, look at this poll: http://www.gamefaqs.com/poll/index.html?poll=1834

The moral of the story is that Zero is strong, and the Mega Man X series is the favorite Mega Man series on GameFAQs; transversely, one would expect the main villain of the series to be strong as well. Most people who filled out their brackets remembered all of this, coupled with Fox's disappointments in past contests. Many people expected Sigma to roll over Andross and possibly even give Bowser a run for his money as well.

It took all of one match to put an end to these thoughts. Sigma did as expected early in the match, but after a few minutes, his percentage began dropping like a rock. Sigma never wound up being in any actual danger of losing the match, but this wound up being a Pyrrhic victory if there ever was one. Andross won a few updates throughout the day, and though he never put Sigma in any danger of actually losing the match, Sigma's struggle with Andross only meant one of two things. Either Andross was a lot stronger than expected, or Sigma was a hell of a lot weaker. There was little evidence of the former, and Sigma was clearly in a ton of trouble come the second round. You don't struggle with Andross and then turn around and expect to give Bowser any sort of problems.

The other thing that this match proved was what would grow to be a rather alarming trend: low vote totals. Here we had a relatively close match, and the vote total failed to break 70000. Either interest in these contests has clearly fallen off the cliff since 2003, or people truly do only care about matches featuring heavy hitters. And unfortunately for this contest, most of the characters in the bracket were already known to be weak bastards. 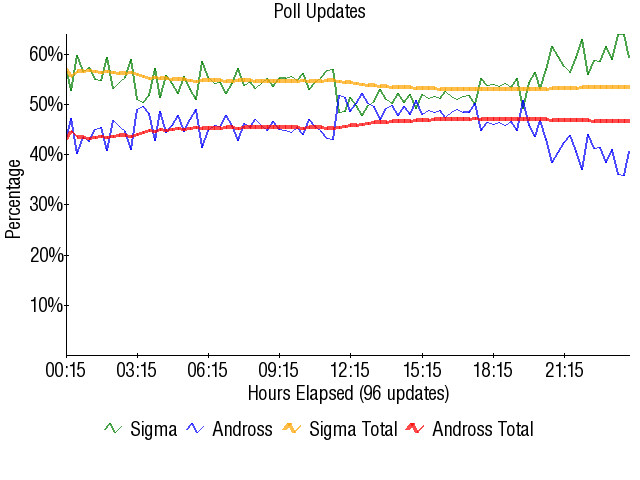 Retrieved from "https://board8.fandom.com/wiki/(4)Sigma_vs_(5)Andross_2005?oldid=55942"
Community content is available under CC-BY-SA unless otherwise noted.