"Why does this character get so overrated every year?", Tidus Edition.

2002 (Before any contest): http://www.gamefaqs.com/poll/index.html?poll=841
Summer 2002: Beats Claire Redfield 55-45 (LOL), breaks 40% on Sonic.
Summer 2003: Barely loses to Ganondorf.
Side Poll from 2003: http://www.gamefaqs.com/poll/index.html?poll=1445
Summer 2004: Barely beats Shadow the Hedgehog, gets 65-35'd by Mega Man when slaves to the X-Stats thought he would score something like 49%.
Summer 2005: Beats King of All Cosmos, gets totally blown out by Kirby in a match the LOL x-stats had Tidus winning.
Summer 2006: Gets 72-28'd by Squall. Many blame SFF.
Summer 2007: Second place against Isaac, Pikachu and Serge, then a close last place against Pikachu, Leon Kennedy and Vivi.
Summer 2008: Barely loses out on first place against Cube, DK and Tails, then finishes third against Cube, Mega Man and Nero.


Only slaves to extrapolated standings think Tidus is worth anything, but those with common sense realize he's just the Final Fantasy series version of Shadow the Hedgehog or Master Chief. Always looks decent, always loses weird matches he should win easily, always gets overrated because NEXT YEAR WILL BE HIS YEAR. This guy has been in every major character contest and has never once gotten past the second round. People don't like Tidus, anti-vote him a lot and render him non-transitive or non-linear or whatever you want to call it. Shadow the Hedgehog is an especially ironic comparison, because the 2003 stats equally overrated them and the match went as planned anyway. It was hilarious.

Which leads us to this year. There was no doubt Sub-Zero would do in this match what he did to Master Chief in 2006. Don't let the final percentage fool you, either. This was never close and is another match in a long line of bad performances by Tidus. Next year they should just set up (5)Tidus vs (12)Jecht and complete the embarrassment full circle. 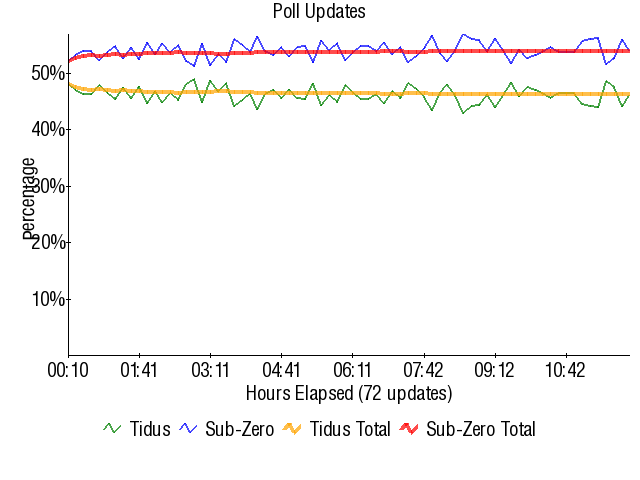