Why not? Let's all nominate the King of All Cosmos for the contest! It's not like he can cause damage or anything.

Yeah, right. After a billion Katamari Damacy fads and BA NA NA being repeated over and over again, We had to prepare for Our match. We could have easily crushed Tidus with a flick of Our wrist, but chose instead to formulate a plan to make those who picked Tidus to defeat Kirby feel just a little embarrassed.
We decided that instead of using Our full capabilities to destroy Tidus 99.9-0.1, We would rather throw the match... but We only allowed Tidus the strength to win this one match, for We proved that he was unable to defeat Kirby.
Tidus's fans expected Us to start falling like crazy after receiving a good deal of the board vote -- They said that We were a joke character !! -- when We were in fact doing nothing more than proving that Tidus was overrated from the start and that he had no chance of defeating Kirby.
You see, after the board vote wore off, We did indeed start to fall; but much to everyone's surprise, We stayed at 27% for the entire match despite those Earth people thinking that We would not break 20% and that Tidus was a lock to defeat Kirby from the beginning.
By the time We were done playing Katamari Damacy -- A fun, action-packed game if there ever was one !! -- with Tidus, We proved that he would lose his next match. Tidus only scored 72.54% on Us, while Kirby scored 75.21% on Cecil.
As for how this proved that Kirby would defeat Tidus despite Us throwing the match, that's for you to figure out.

....you get the idea. For Tidus to have any chance of defeating Kirby, he would have to not only hope that The King of All Cosmos was a good deal stronger than Cecil, but that Kirby overperformed on Cecil by quite a large amount. That's a bit too much to ask for, and this match was one more step in proving that 2003 Tidus was a complete fraud. In every other match not named Tidus/Ganon 2003, Tidus has shown that his true colors are not near what 2003 would have you believe. The next round would tell us the final answer on Tidus once and for all, but really, I have no clue how anyone could think that Tidus had a prayer after seeing him disappoint by this much against The King.

Yes, The King threw the match. But He did so with a very clear purpose in mind. 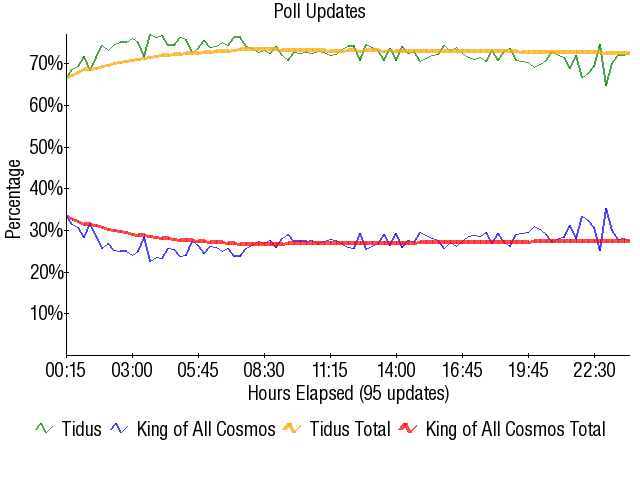 Retrieved from "https://board8.fandom.com/wiki/(4)Tidus_vs_(5)King_of_All_Cosmos_2005?oldid=56043"
Community content is available under CC-BY-SA unless otherwise noted.