Before I even bother trying to explain why this match was obvious (to me, anyway) from the beginning, please look at this poll: http://www.gamefaqs.com/poll/index.html?poll=2004

Kuja, the main villain of Final Fantasy 9, lost to a god damn glove.

Now with that out of the way, onto another cheap shot at the wonderful X-stats. Frankly, I don't see any other reason why people thought this would be close other than the stats, and the fact that people thought Vivi had any chance in this match is yet another in a long line of examples of X-stats and common sense not being synonymous.

We'll ignore the fact that 2004 Vivi is projected to score something like 44.65% on 2003 Zelda and that Sephiroth would have had to SFF the hell out of Vivi for Vivi (whose villain was beaten by a glove) to stand any chance in the match. Because after all, for Vivi to have a shot at Zelda, he would have to be able to take down characters like Auron, Dante, and Bowser.

But it gets more hilarious than even that. Since 2003, Link has increased. by roughly 2-3%. Since 2003, Ganon was likely increased 2-3% as well. This means that assuming Zelda received a similar 2-3% boost between 2003 and now, Vivi would have to be a perennial top 15 powerhouse to hang with and beat her.

This would mean that Vivi (whose villain was defeated by a glove) is on par with the likes of Zero and Aeris, and would be expected to beat the piss out of Squall. On a completely unrelated note, Vivi's game, Final Fantasy 9, saw its villain lose to a glove in the Spring 2005 Contest. We're not even talking an actual character here, mind you. It's just the thing you fight at the end of SSB/M because Nintendo couldn't think of anything better.

Where was I, again? Oh right, Vivi. Vivi may have been hit by SFF against Sephiroth, but come on. Was it really enough to put him with the likes of Aeris in the stats?

But naturally, the match soon began and everyone (almost everyone, anyway) was beyond shocked at Zelda beginning the match well over 60%, followed by flirting with the 60% level itself for the entire match. Some expected Vivi to fight back a little to retain some respect, but he never did. Zelda began and ended the match by beating the ever-loving hell out of the little guy, and the questions started pouring in about how such a debated match turned into such a joke.

Which is why I'm here: to feed you the stuff you want to hear as if I know all the answers myself >_>

First off, I think it's fairly obvious that Zelda received the Zelda Boost™ that Link and Ganon have enjoyed since 2003. Secondly, I don't think Vivi was SFFd by Sephiroth very much, if at all. Thirdly, I think Vivi pulled smoke and mirrors in his match against Donkey Kong and fooled people into thinking he was stronger than he really is. Not to say that he should have lost or anything, but Donkey Kong is Nintendo's version of Alex Rodriguez. He's good, but everyone seems to hate him. I truly think that Vivi did better than he should have in that match by a percent or two.

Add it all up, and you get Zelda whipping Vivi's ass with almost 60% of the vote. Cue the Zelda > Snake bandwagon that I foolishly helped begin. 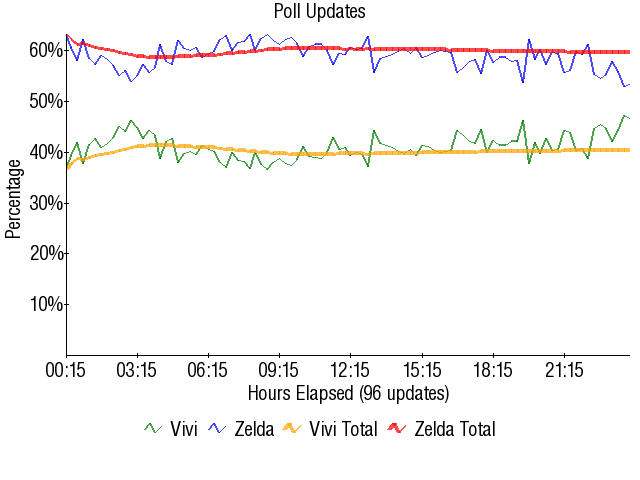 Retrieved from "https://board8.fandom.com/wiki/(4)Vivi_vs_(5)Zelda_2005?oldid=56035"
Community content is available under CC-BY-SA unless otherwise noted.