Let's go back in time a bit. Remember this match? http://board8.wikia.com/wiki/Sonic_vs_Sandbag_vs_Magus_vs_Shepard_2008

People remember it for Magus blowing a 2150 vote lead, in a 4way, to a Home Run Contest punching bag (literally). That was bad to be sure, but Shaepard was also in that poll on the strength of Mass Effect alone. He got nearly doubled by Magus and that same Sandbag. You know who else has been doubled by Magus? Luca Blight and Sam Fisher. Enough said.

Back to present day. During the AFC Championship Game, Mass Effect 2 had a two-minute commercial that cost a ton of money. After that, you couldn't watch TV for more than 10 minutes without seeing a Mass Effect 2 commercial. The hype was completely nuts.

Why is this all relevant? Mass Effect 2's release day was January 26th, 2010. This match took place on March 1st. That's a full month for hype to settle in, and for a ton of people to buy, love and even beat the game. Sales were off the charts, critical acclaim more so, and the game is basically universally loved. Unless you're MWIS, but he doesn't count. If he doesn't like something, you can bet it's probably something really good.

So the match starts. There was mild hype for Shepard pulling an upset here, but most reasonable people knew this would never be in doubt. Nor was it. Pokemon doing well a day match in the Winter 2010 Contest was as sure a bet as the sun rising in the east. That said, Pikachu didn't go out and crush the guy. The percentages stayed almost the same all day, which meant no insane trends or Pokemon ASVs. It was a good win for Pikachu, considering this was his first non-SFF 1v1 win since 2002.

But for Shepard, you have to tip your hat to the guy. Thanks to one game, he went from getting doubled by Magus to making Pikachu struggle to break 60%. There was an insane amount of whining over this result that blinded people from how well Shepard did here, but people will eventually look back on this match and see how well he really did. 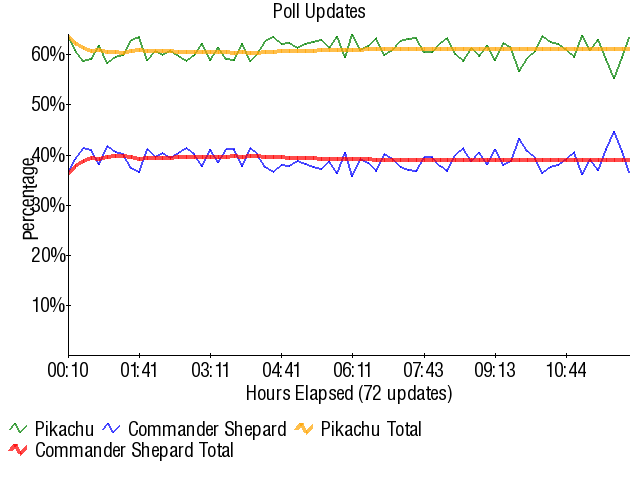 • Previous Match       • Next Match
Retrieved from "https://board8.fandom.com/wiki/(5)Pikachu_vs_(4)Commander_Shepard_2010?oldid=61348"
Community content is available under CC-BY-SA unless otherwise noted.