New characters are the best. A lot of the board, especially the stats topic, was buried in Red hype for months leading up to this match. And because the character is new, there's no evidence to disprove anyone's claims. It's Schrodinger's Verschränkung. Some people had Red challenging Mega Man X in round 2, while others felt Red would be fodder and get crushed by Ocelot with ease. Unfortunately for those who didn't care, there were few people in the middle and the argument wouldn't stop until the match. Ocelot's a big enigma in his own right. Dude beats Jill before MGS4, then loses to her a year later afterwards. Kind of fitting he ends up getting the fewest nominations of anyone not in the vote-ins.

When the match finally began, Red looked like he would cruise to one of those only-close-on-paper wins. He jumped out by 500 through the power hour, and he would eventually get the lead up to 666. Everyone expected the match to be a lot closer than this, but for awhile Ocelot was putting up a real stinker. The other thing everyone expected however was a Pokemon character slowing down at night, especially against something from MGS. The match stalled for a bit after 2 am, but then Ocelot started cutting away. He chipped at the lead for a bit and got it down to 450 over the next couple hours, and then the dead zone kicked in. Ocelot started dominating the dead hours, and erased the entire lead by 6.

It was obvious however Ocelot needed to pad a lead before the kids woke up, and he did so. Over the next three hours, he built up a lead of nearly 400 votes. This actually lasted until 9 am, so it looked like Ocelot was in the clear and had avoided the worst. Usually, the BSV starts around 7. Inexplicably, Red failed to win the morning vote, and even come 9 he was only able to get in some minor stalls. Come 10, the lead was still over 300 votes.

But then, the perfect storm. Metal Gear Solid is routinely awful during the day, and Pokemon is almost always great during the day. Add all this up, and you get Red erasing 320 votes in 80 minutes, then sprinting to the finish line with a win before anyone could figure out what happened. Red did catch the morning vote and run away with it, it just came a few hours later than expected. People didn't know it yet, but this was how Pokemon would be in the Winter 2010 Contest.

This match confirmed two things: Pokemon is no joke, and Ocelot is not trustworthy. If this were a full 24 hour match, Ocelot would have gotten his doors blown off. 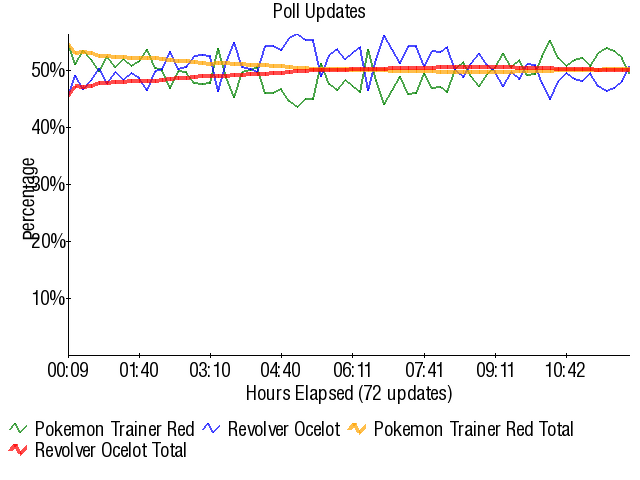 • Previous Match       • Next Match
Retrieved from "https://board8.fandom.com/wiki/(5)Pokemon_Trainer_Red_vs_(12)Revolver_Ocelot_2010?oldid=59634"
Community content is available under CC-BY-SA unless otherwise noted.