Until Auron's match against Scorpion, Viewtiful Joe's victory in the match was believed to be a foregone conclusion. After all, Tails has been the sacrificial lamb for contest newcomers for two years running prior to this match. Why would this year be any different? Tails's loss against Auron in 2003 was acceptable, but the match to compare Joe/Tails to is the 2002 match between Alucard and Tails. In 2002, Alucard came into the contest as a relative unknown. What he had going for him was that he was the main character in Castlevania: Symphony of the Night. Despite the game not selling all that well (just under 1 million copies, if I recall), the game received rave reviews all over the internet, and Alucard was able to ride this momentum all the way to a victory against Tails.

Viewtiful Joe fits within the same mold, in a way. His game didn't sell all that well, but those who did play the game gave it rave reviews all over the place. But Viewtiful Joe did not have quite as much going for him as Alucard did in 2002. Not only did SOTN sell close to one million coies, but Alucard himself starred in other Castlevania titles within the series as well. Viewtiful Joe, despite being critically acclaimed, did not give Joe nearly the exposure that SOTN gave Alucard. The game itself has sold around half as well as SOTN, and unlike Alucard, Viewtiful Joe's only appearance was in his one game. But even still, a good argument could be made in Viewtiful Joe's favor. He isn't Alucard, plain and simple. He is the main character from a recent hit, and on top of that Viewtiful Joe had his game released for the Playstation 2 just days prior to his match with Tails.

But because of Auron's killing of Scorpion, it became clear that Tails was being underestimated coming into this match. Regardless of how bad Sonic Heroes was, the case can easily be made that Tails suffered a few percentage points in strength due to Cloud/Auron SFF, and if you really want to throw the SFF theories out there, it's very possible that the entire North division could have suffered a bit due to Mario's distant SFF against Link in the finals that year.

When the match began, Tails jumped out to a small early lead, and after an attempt by Viewtiful Joe to come back, Tails started using the traditional early morning Sega vote to pull away for good. In a match that was supposed to go to Viewtiful Joe with ease, Tails wound up being the one to cruise to the win. This isn't to say that a 55-45 match is a blowout, but considering how easy it was supposed to be for Joe to pull this out, a 55-45 victory in the other direction is very convincing. Few people were surprised (unfortunately), simply because you could feel it coming after Auron's massive overperformance against Scorpion, but still, it was nice to see an upset. The funny thing about this particular upset is that we lost a lot of perfect brackets because of Tails. I can see matches like Tidus/Shadow and Vivi/DK killing perfects, but losing a perfect because of Tails is pretty damned hilarious.

NOTE: NEVER LET HEROIC MARIO FORGET THAT HE LOST HIS PERFECT 2004 BRACKET TO A SONIC CHARACTER =)

I kid, I kid. Sort of. Another interesting note is that this match became the biggest BOP upset ever, surpassing even the fabled Halo vs Starcraft epic. And I think this is awesome, because even though the match was more boring than we would have liked, we get to see it stand out in a few areas historically. And besides, Tails finally won a match. Like him or hate him, he didn't deserve to be treated like a joke forever.

But what does this say of Viewtiful Joe? If having a game released all of three days before a match can't get him a win, then how is Viewtiful Joe 2 going to help him? I doubt that it will, and Joe is one more example that it's nearly impossible to avoid the traditional 5-12 upset that we see in every contest. Even worse is the fact that Joe may very well turn out to be on the level of the 3D platformer characters (TRANSLATION: THE CHARACTERS THAT ALL HORRIBLY BOMBED IN 2004) as the contest continues to evolve. 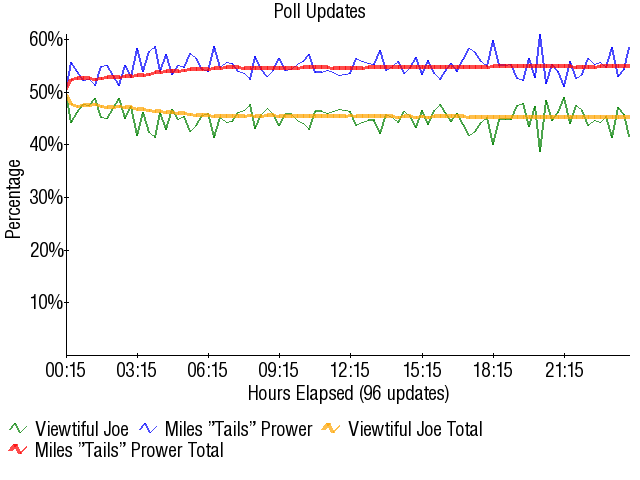 Retrieved from "https://board8.fandom.com/wiki/(5)Viewtiful_Joe_vs_(12)Miles_%22Tails%22_Prower_2004?oldid=55838"
Community content is available under CC-BY-SA unless otherwise noted.